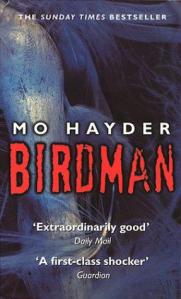 If you like crime thrillers that are fast-paced and intelligent, with believable characters and a plot that keeps you guessing right until the end, then you will eat up Mo Hayder‘s Birdman. Mind you, the gruesome detail is not for the faint-hearted, but this is what elevates Hayder’s writing above so many run-of-the mill crime novels cluttering the bestseller lists — she is not afraid to tell it like it is even if the descriptions may be hard to stomach.

Essentially, Birdman is about the police hunt for the murderer of five prostitutes, whose bodies are found dumped in wasteland near the Millennium Dome in south-east London. Inside each victim lies a mysterious clue left by the perpetrator of the crime.

It is the Met’s crack young detective inspector, Jack Caffery, who looks beyond the obvious, often incurring the wrath of his fellow colleagues, to track down the sexual serial killer before another woman falls victim.

Meanwhile, Caffery is wrestling demons of his own, including the mysterious childhood disappearance of his brother, a demanding girlfriend fighting off cancer and a burgeoning relationship with a pretty female artist who he feels he shouldn’t be getting involved with. This not only makes Caffery such a compelling and convincing character, it underpins the novel’s intelligence and moral seriousness, something which also characterises Hayder’s second novel, The Treatment.

Unfortunately, I read these books in the wrong order, not knowing that the storylines are linked, so I’d recommend reading Birdman first (otherwise you know which girl he ends up with and which of his fellow crimefighters is killed on the job).

1 thought on “‘Birdman’ by Mo Hayder”