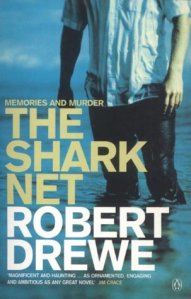 Robert Drewe is one of Australia’s most critically acclaimed writers. In this book he switches his focus from fiction to memoir, with mixed results.

Born in Melbourne, Drewe moved to Perth with his family when he was a young boy. In the most isolated city on earth, he lived a comfortable and carefree middle-class existence by the beach. But then a man Drewe knew murdered a boy he also knew. Before long, a murderer was on the rampage, randomly killing eight strangers. Suddenly life took on a darker twist.

At the same time that Perth was losing its innocence, so, too, was Drewe, who became a teenage father and husband, something his upstanding parents found difficult to deal with.

While I had expected the book to concentrate on Perth’s dark underbelly and Drewe’s reaction to the crimes happening around him, what I got was a rather uninspiring account of an ordinary suburban childhood. While I found the descriptions of Perth intriguing and could feel Drewe’s love of its amazing coastline and the friendliness of the people resonate off the pages, I found the lack of dates annoying (was it the fifties or the sixties?) and some of his writing pedestrian.

However, his insights into life as a young cadet reporter were interesting; if only breaking into journalism and then getting a job on Melbourne’s Age was as easy now as it was then!

All in all, this is an entertaining account of an Australian childhood in a bygone, if somewhat unspecified, era.

2 thoughts on “‘The Shark Net’ by Robert Drewe”