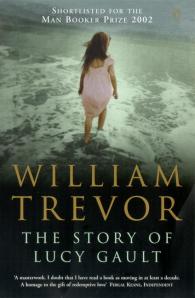 It is 1921. Ireland is in a state of unrest. Captain Gault and his wife decide to flee their home on the coast and move to England, but their nine-year-old daughter, Lucy, has other ideas. She loves her home so much she doesn’t want to leave. She goes missing and when her clothes are found on the beach her parents assume that she has drowned.

Devastated by grief, they pack up their belongings and head off to Europe to start their lives again. When Lucy is later discovered, still alive but with a bad ankle injury, no one is able to trace her parents.

William Trevor‘s The Story of Lucy Gault — shortlisted for the Booker Prize 2002 — is a gripping account of what happens to a young child unwittingly abandoned by her parents. The writing is stripped-back, almost old-fashioned in a way, but it is never dull. Instead it is magical and fairy-tale like and incredibly evocative of a past era. And Trevor has such a deft way with words that it is often the things that go unsaid that have the most impact.

In many ways this book reminded me of Ian McEwan’s Atonement, in the sense that it is about a young girl who knows that she has done something wrong and then spends the rest of her life trying to atone her guilt. But where McEwan tries to be clever, Trevor never plays games with his readers.

This is an intelligent, mesmerising and moving novel. It is also incredibly, devastatingly sad and I defy any reader not to shed a tear when reading it. This is the first William Trevor story I have read; it won’t be the last.

2 thoughts on “‘The Story of Lucy Gault’ by William Trevor”