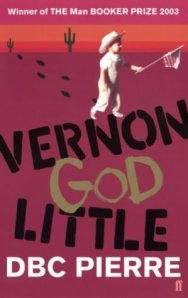 It’s a bit like Catcher In the Rye updated for the 21st century, except it’s slightly more off the wall, and I could never imagine Holden Caulfield, despite all his teen angst, suddenly finding himself on some mind-bending reality show on Death Row where viewers vote who’s going to be the next one to meet ol’ Sparky. Yes, I told you it was weird.

DBC Pierre came out of nowhere to land the Booker Prize last year. And like this novel – his first – he seems a bit weird and wacky, too. There’s an interesting interview with him here, which sheds some light on his background and where the seed of this book was sown.

I have to say that I was impressed with Pierre’s turns of phrase, his clever way with words and his inventive use of language.

Outside a jungle of clouds had grown over the sun. They kindle the whiff of damp dog, burping lightning without a sound. Fate clouds. They mean get the fuck out of town, go visit Nana or something, until things quiet down, until the truth seeps out. Get rid of the drugs from home, then take a road trip.

I think what I enjoyed most about Vernon God Little was the satire, the whole sending-up of small town America (although I’ve never been to Texas, reading this book is exactly what I imagine it to be like, images and impressions cobbled together from movies and TV shows).

This is closely followed by the narrator’s voice. It’s unique and, for the most part, rings true. Even though the aforementioned Holden Caulfied had “issues” and was alienated, his problems, his views, were tame by comparison. One gets the impression that Vernon Gregory Little DOESN’T HAVE A CLUE about how the world operates: he’s naive and gullible; he’s also highly manipulative and self-centred and he’s just a tad sex-obsessed; but he also has a health problem that keeps him grounded in an endearing kind of self-conscious way.

The story itself, which reads a bit like a road movie, is not so much plot driven but character driven. Effectively it all happens in Vernon’s head. And the whole premise of a school shooting, which puts Vernon on America’s Most Wanted List, happens before the story even starts; you just get tiny “glimpses” of what actually happened on that fateful day, filtered through Vernon’s eyes, towards the end of the book.

What I didn’t like was the almost fantastical elements to it (especially Part V); they were riotously funny but a little ridiculous and because of that the story didn’t seem particularly believable. It also took me awhile to get into the flow of the book; I think this is a read-in-big-chunks type of story rather than one you can pick up and read for small, intermittent periods.

All in all, an interesting and somewhat intriguing novel, but unless you’re an experienced “literary” type reader who doesn’t mind bad language, quirky characterisation and experimental story-telling, I’d say this one isn’t for you.