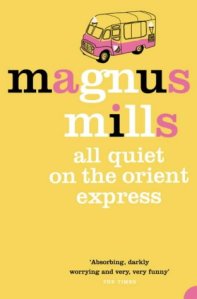 The Lake District, England. It’s the end of summer. All the tourists have packed up and gone home – except one young man, the unnamed narrator of this book, who decides to hang on for a couple of more days before heading to India on a backpacking adventure.

Tommy Parker, who owns the land our narrator is camping on, befriends him, and gives him a succession of odd jobs to do. The jobs become more complicated and more time consuming. Before long our narrator finds himself so embroiled in the local community, with its sinister undertones and strange, quirky characters, that all idea of travelling to the subcontinent gets completely shelved.

He spends his days working for Parker while his evenings are spent doing homework for Parker’s teenage daughter and playing darts and drinking pints in the local pub. All the while he has one eye looking over his shoulder, because he keeps doing things that – for reasons unfathomable to him – upset others. “You better watch Parker’s temper,” he keeps getting told, which only makes our narrator more nervous and watchful.

It’s this kind of suspense, built up over a succession of nothing incidents, that keeps the reader turning the pages. And despite the subtle plot, which tends to go nowhere fast, I loved this book.

Still, Magnus Mills‘ All Quiet on the Orient Express (I’m still trying to work out what the title means) is one of the strangest novels I’ve ever read. But it is also one of the funniest. There are scenes and conversations that are so laugh-out-loud funny I had to stifle my guffaws while reading this on public transport lest my fellow passengers thought I was certifiable.

Apart from the dark humour, the book’s greatest strength lies in its simplicity. Unlike The No.1 Ladies’ Detective Agency by Alexander McCall Smith, which I found overly childlike and mundane in its naivety, All Quiet on the Orient Express has an intelligence and a wisdom that resonates off the page. Hence many reviewers have called his writing “Kafka-like”. I agree.

Mills’s prose is so stripped back it is practically anorexic. He wastes no word on descriptions of anything – all the scenery, all the action, all the characterisation is painted via dialogue. And what an ear for dialogue he has. He can convey so much by a simple conversation between two people, such as this exchange on the telephone:

“You may wish to know we’ve had a new consignment of beans.”
“Have you?” I said.
“Would you like to order some?”

“Baked beans, are they?”

“Fresh from the factory, in cans with a handy ring-pull lid?”

“That’s the ones,” said Hodge.

At that moment the pips went again and I hung up.

Mills also has an uncanny knack of being able to tap into the English psyche. Despite the fact that his cast of characters are quietly seething or pissed off about one thing or another, they never express this to the people causing them the grief. Instead they are well mannered and refuse to make a fuss. As a result nothing ever gets resolved. Just like real English life.

Many of the characters are also wonderfully eccentric.

All in all, this is a brilliant book. On the surface it seems simple and straightforward, but underneath there is so much more going on. And the twist at the end is delicious!

Maybe, just maybe, Mills could be my new favourite author. I’ve already gone out and purchased two more from his back catalogue.