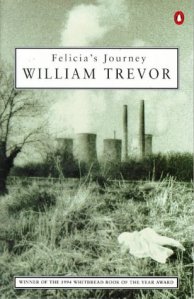 William Trevor‘s Felicia’s Journey is a wonderful, heartbreaking tale of a teenage girl’s search for the father of her unborn child. That search takes her from her childhood home in Dublin, Ireland, to the bleak, post-industrial heartland of the British Midlands. Her journey is fraught with difficulty and disaster until she meets the seemingly kindly Mr Hilditch who takes her under his wing. At just 17 years of age, Felicia’s stranger-danger radar seems far from tuned and she naively accepts his assistance.

This perfectly written novel (not a sentence, not a word, is out of place) is an enriching read. Felicia’s character – her naivety, her grit, her determination – is in stark contrast to Mr Hilditch’s smarmy, insidiously creepy, traits.

“Watching” Felicia blindly going on her wild goose chase is difficult enough without having the menacing Mr Hilditch – a catering man in love with food – follow her every move.

Without wishing to spoil the ending for anyone, I can say it is heartbreakingly sad, and some tissues might come in handy.