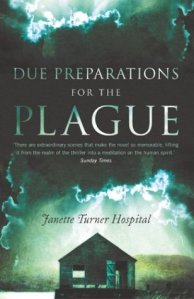 The central focus of Janette Turner Hospital’s Due Preparations for the Plague is the hijack of an Air France plane. The terrorists responsible keep 10 hostages as a negotiating card. Each of these 10 hostages has a story to tell their loved ones before they die. But more than a dozen years pass before these stories reach the outside world. In that time the children of the hostages, and other survivors of the event, are still grappling with the horrifying consequences of what happened to Flight 64.

While the hijacking  is set in 1987, the similarities to the real life terrorist attacks on September 11, 2001 in the USA are eerily apparent. In fact, Turner Hospital acknowledges that those events had a bearing on the novel, although she’d pretty much finished the manuscript when 9/11 occurred. For the reader, this makes the book all the more realistic and terrifying. I found myself becoming more and more anxious (and paranoid) as the story unfolded.

Due Preparations for the Plague (the title comes from Daniel Defoe’s writings on the Bubonic Plague and how to survive it) is a riveting, electrifying and haunting read. Turner Hospital weaves a wicked web of deceit and deception. But in doing so she never loses sight of what it is that makes this novel such a tour de force: the impact of man’s deadly ways on the lives and loves of everyone involved. Through one exceptionally horrific event she is able to chart the full spectrum of human emotions — fear, rage, suffering, heartbreak, jealousy and love — with aplomb and gravitas.

This consummately written novel could not be better placed to draw on the current age of paranoia we live in. I expect it will usher in a whole host of similarly plotted books although I doubt any will be as haunting and as beautifully written as this one. My only quibble is the ending, which was disappointing because it seemed so silly and predictable. But all in all this is an exceptional thriller.