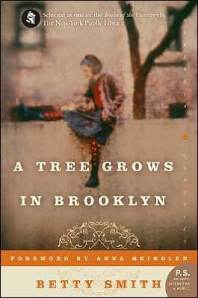 Originally published in 1943, Betty Smith’s A Tree Grows in Brooklyn is billed as a much-loved American classic. The cover of my new paperback edition says it was selected as one of the Books of the Century by the New York Public Library.

But up until a recent visit to Manhattan, I’m ashamed to admit I had never heard of A Tree Grows in Brooklyn and the only reason I discovered it was via the book recommendations in the back of The Rough Guide to New York City, which described it as “totally absorbing”.

Set between the years 1912-1919, it’s a profoundly moving coming-of-age story told through the eyes of Francie Nolan, a 12-year-old girl, who scours the streets with her younger brother, Neeley, for rags, metal and other scraps to sell to the junk man for a few pennies.

Here, in the Williamsburg slums of Brooklyn, the Nolan family — headstrong Katie, who scrubs floors for a meagre wage, and Johnny, a singing waiter, who spends what he earns on booze — must eke out a hand-to-mouth existence, living on coffee and the occasional treat, like a banana or an avocado.

Amid the poverty and the suffering, Francie is an imaginative and intelligent child who dreams of better things and a better life. And who, through hard work and determination, manages to rise above her situation against enormous odds to achieve her mother’s dream of acquiring an education.

One of my favourite scenes from the book is this: Francie and  Neeley must be immunised before they are allowed to attend school. But they are so busy making mud pies they almost forget to go to the public clinic to get their injections. As they wait on a bench for their turn to be called, Francie trembles because she has never seen a doctor or a nurse in her life and isn’t sure what to expect. When she enters the doctor’s room the nurse swabs her arm, and then Francie notices the doctor “staring at her arm in distaste”.

“Filth, filth, from morning to night.
I know they’re poor, but they could wash. Water is free and soap is cheap. Just look at that arm, nurse.”
The nurse looked and clucked in horror. Francie stood there with the hot flamepoints of shame burning her face. […]
After the doctor’s outburst, Francie stood hanging her head. She was a dirty girl. That’s what the doctor meant. He was talking more quietly now, asking the nurse how that kind of people could survive; that it would be a better world if they were sterilised and couldn’t breed any more. Did that mean he wanted her to die? Would he do something to make her die because her hands and arms were dirty from making the mud pies?
[…]
When the needle jabbed, Francie never felt it. The waves of hurt started by the doctor’s words were racking her body and drove out all other feeling. While the nurse was expertly tying a strip of gauze around her arm and the doctor was putting his instrument in the steriliser and taking out a fresh needle, Francie spoke up.
“My  brother is next. His arm is just as dirty as mine so don’t be surprised. And you don’t have to tell him. You told me.”
They stared at this bit of humanity who had become so strangely articulate. Francie’s voice went ragged with a sob. “You don’t have to tell him. Besides it won’t do no good. He’s a boy and he don’t care if he is dirty.” She turned, stumbled a little and walked out of the room. As the door closed, she heard the doctor’s surprised voice.
“I had no idea she’d understand what I was saying.”

What can I say about this book that probably hasn’t already been said? It’s very simply written, with no real plot or storyline, but it somehow captures the spirit of the human condition and eloquently details the universal emotions we are all familiar with: heartache, pain, grief, loss, despair, happiness, joy and optimism.

It is gut-wrenchingly sad in places, but in others brims with unbounded enthusiasm for life.

It also captures a past era and the day-to-day struggles of immigrant families living in Brooklyn, where a journey across the bridge to Manhattan, was like entering another world, unfamiliar and strange. And because the author, a German immigrant who grew up poor in Williamsburg, based the character of Francie on herself, it has an air of authenticity that makes A Tree Grow in Brooklyn ring especially true.

I adored this book and can understand why it has been taken to the hearts of so many American readers. I found it reminiscent of Ruth Park’s Harp in the South Trilogy, which is based on Irish immigrants settling in the inner-city slums of Sydney after the Second World War.

5 thoughts on “‘A Tree Grows in Brooklyn’ by Betty Smith”