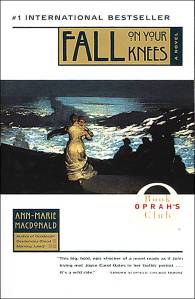 First published in 1996, this acclaimed debut novel by Ann-Marie MacDonald tells the unforgettable story of four sisters — Kathleen, the beautiful and talented one; Mercedes, the good and morally upstanding one; Frances, the wayward and bad one; and Lily, the much-adored crippled one — growing up on Cape Breton Island in the early 20th century.

Their parents — James, a complicated but intelligent man, and Materia, a troubled woman of Lebanese extraction — battle demons and family secrets to raise their children amid the poverty-stricken coal mining community in which they live. Coupled with the horrors of World War I and the diseases which ravished whole towns and killed children before their time, is it any wonder this book is a little on the depressing side?

If that’s not enough Fall on Your Knees, which can best be described as a sprawling family drama, is charged by a disturbing undercurrent of violence, racism and incest.

Despite the explosive subject matter I must admit that it took me some time to ‘get into’ the story. I found it a little slow in places and the storyline seemed pointless. Plus, I didn’t feel emotionally attached to any of the characters. But there were certain parts that I adored (for example, Book 6: The Girl Guide, which is about Frances’ foray into the sleazy world of strip-teasing, and Book 8: Hejira, which is about Kathleen’s risque time amid New York’s emerging jazz scene). And, just when I’d resigned myself to giving this novel a fairly mediocre 3-star review, along came one of the most satisfying and surprising endings I’ve read in modern fiction for quite some time.

MacDonald somehow neatly draws together all the loose elements to deliver a heart-hammering and completely unexpected shocker of an ending, a climax that left me feeling totally stunned.

Fall on Your Knees is an ambitious novel which requires a lot of hard work on behalf of the reader, but it is well worth the effort in the long run.

5 thoughts on “‘Fall on Your Knees’ by Ann-Marie MacDonald”