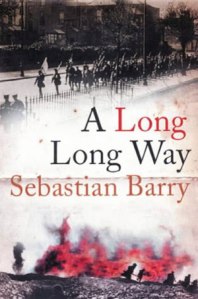 It is 1915 and the Great War has just begun. Ireland, with the promise of Home Rule in its sights, agrees to send its own to fight for the nation.

Seventeen-year-old Willie Dunne, who desperately wants to please his loyalist father, a much respected member of the Dublin Metropolitan Police, joins the Army because at 5ft 6in he is too short to join the force.

But when he came home and told his father, the big, blank, broad face of the policeman wept in the darkness. And then his three sisters, Maud, Annie and Dolly, lit the candles in the sitting-room and they all felt part of the tremendous enterprise because Willie was going to be in it, and they were proud and excited, though it might last a few weeks at most, because the Germans were known to be only murderous cowards.”

Willie’s regiment, the Royal Dublin Fusiliers, is sent to the muddied rat-strewn trenches of Belgium to fight for King and Country. Amid the mayhem, the bullets and the blood, Willie and his fellow soldiers eke out a harrowing existence, clinging to life by the flimsiest of threads.

During a brief sojourn home on some well-earned leave Willie finds himself caught up in the political events of the 1916 Easter Uprising. Troubled by what he sees, he begins to question whether he – and the rest of his regiment – have become the enemy of the Irish rebels. When he mentions these concerns in a letter home his father disowns him.

What follows is a heartbreaking account of one young man’s realisation that there is more to life than pleasing one’s father – and one’s country.

I had tears coursing down my cheeks as I read sections of this book filled as it is with moments of such desperate sadness. To know that Willie had endured so much — the  terror and violence and madness of the trenches — only to return to a country that had undergone a bloody revolution and no longer felt like his was very emotional. Coupled with a melancholy romance with Gretta, his childhood sweetheart, this book is a true “weepy”. But don’t let that put you off.

Sebastian Barry’s writing, so wonderfully lyrical and poignant (not surprising given that he is also a poet), is a joy to read. It is rich with the Dublin vernacular, not just in the quoted speech of the characters, but in the telling of the story itself. This makes the story come truly alive in ways that a more distant, staid narrative would not have achieved.

I adored A Long, Long Way on so many levels: its eloquent conversational prose; its ability to move a sometimes jaded reader; and its themes – the futility of war, Irish politics and how one young man learns to think for himself.

Very much reminiscent of Erich Maria Remarque’s much lauded All Quiet on the Western Front, this book, which was shortlisted for last year’s Man Booker Prize, is a devastating read with a clear, bright ring of truth. I highly recommend it if you wish to read some First World War fiction that has a slightly different slant — that of the Irish soldier caught between two wars.

10 thoughts on “‘A Long Long Way’ by Sebastian Barry”

Leave a Reply to Sharon x