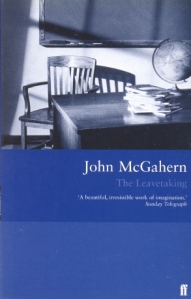 First published in 1974, John McGahern revised The Leavetaking, his third novel, a decade later because he thought it “lacked that distance, that inner formality or calm, that all writing, no matter what it is attempting, must possess”. The result is a tautly written novel composed of two halves, each radically different to the other.

Essentially it is a love story, about a teacher, Patrick, who is facing dismissal by the school authorities for marrying an American divorcee while on a year’s sabbatical in England. A battle of wills ensues: he won’t resign because he does not feel he has done anything wrong; the church won’t recognise his marriage and make it ‘holy’. His wife, meanwhile, is holed up in rooms in Howth, a seaside suburb of Dublin, happily going about her business until they are found out.

Part One of The Leavetaking is set during the last day of Patrick’s life as a teacher. Knowing that he will be sacked at the end of the day, he recalls how he first fell into teaching, the ‘second priesthood’, when he realised he loved women too much to become a priest. As he reminisces about his past he also recalls his childhood, his parent’s unusual relationship and then his mother’s untimely death. (Having recently read McGahern’s Memoir it is safe to say that the first part of this novel is largely autobiographical.)

Part Two, which is a far more enjoyable and easier read, revolves around Patrick’s adventures in London while on a 12-month leave of absence from the school. Here he meets Isobel, a tall American divorcee, who is the same age as him but comes from a vastly different background. She is tied to the purse strings of her smooth-talking but morally corrupt father, but eventually comes to realise it is time she stood on her own two feet. When the couple marry and return to Ireland, that’s when their troubles begin…

While this book is infused with a deep melancholia it is nowhere near as dark as his previous two offerings, The Barracks and The Dark. Given that McGahern himself faced dismissal as a teacher under similar circumstances I am surprised at the restraint shown here; there’s no malice, no anger, just a quiet understated calm.

His graceful but carefully considered prose is a delight, and his ability to capture period and place is so pitch-perfect you swear you could be standing in that flat-roofed concrete schoolroom or walking on the hill path overlooking the sea at Howth even though you are not.

Ultimately The Leavetaking is a quick read, but its brevity should not be mistaken for shallowness. There is a lot to consider here about vocation, familial relationships, marriage, the Church and 1970s Ireland. I imagine that this slim book could be hungrily devoured over and over, and new meanings, new insights could be gained with each reading. In short, a lovely book about love.

One thought on “‘The Leavetaking’ by John McGahern”