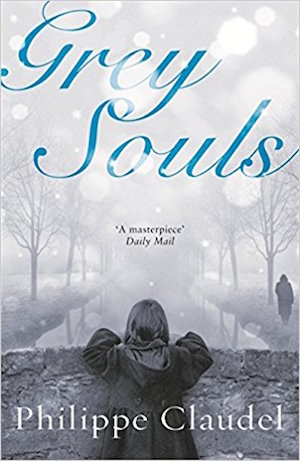 Grey Souls, by Philippe Claudel, is a deeply mysterious, brooding novel set in a small French village during the First World War.

The unnamed narrator, a melancholy soul with secrets of his own to keep, reflects on the investigation of a young girl’s murder in 1917.

Swinging backwards and forwards in time, the narrator explores the town’s leading figures — the judge, the public prosecutor, the school teacher et al —  and shows how the murder affected them, socially, professionally and emotionally.

At the same time, he examines his own life — the ups and downs and great pains he has borne — in order to get at the real truth: was justice delivered when a soldier confessed to the crime?

I read this book holed up in bed with the worst chest infection known to man and I can’t say that this book lightened my mood any. It is very well written, if somewhat meandering to begin with, but the subject matter is quite heavy and depressing and the narrator’s voice borders on suicidal.

At times I found it difficult to work out in which direction the story was going, but the prose is so free of abstractions and beautifully restrained that I didn’t mind too much: I just enjoyed the writing.

Grey Souls is definitely not a light read, but it is certainly a thought-provoking one. And the ending is positively astonishing, if somewhat appalling.