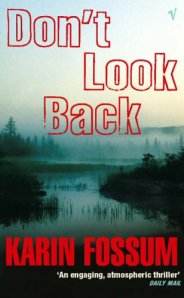 A sleepy Norwegian village is rocked by the discovery of a teenage girl’s naked body lying on the edge of a local, secluded lake. Did she kill herself? Or was she the victim of a sexual attack?

But there’s much more to this crime than meets the eye, as Inspector Sejer soon discovers. The victim, for instance, was an extremely popular girl in the neighbourhood, but she had recently become withdrawn and had quit her school’s handball team despite being a top-notch player. She had also stopped her regular babysitting work. Her mother puts this change in behaviour down to puberty; her father thinks there’s slightly more going on; Sejer wonders if she might have been raped.

There’s little evidence of who committed the murder but several locals fall under suspicion, including a disabled man, a teacher and the girl’s boyfriend. Without giving away the ending, it’s always the person you least expect, isn’t it?

Ultimately, Don’t Look Back, by Karin Fossum, is a fast-moving, well-paced crime thriller that had me guessing all the way through, which is rather rare for me: I normally guess the ending long before I reach the final page.

The prose is straightforward, clear and concise and the dialogue is realistic.

It has a convincing set of characters, especially Inspector Sejer, a widower still mourning the death of his wife, who is smart, tough and fatherly. I liked him enormously.

And the atmosphere — both of the cloying community stunned by the crime, and the sense of dread that builds as the investigation progresses — is pretty much perfect.

On the strength of this one book I’ve already added the remainder of Fossum’s back catalogue to my wish list.

17 thoughts on “‘Don’t Look Back’ by Karin Fossum”