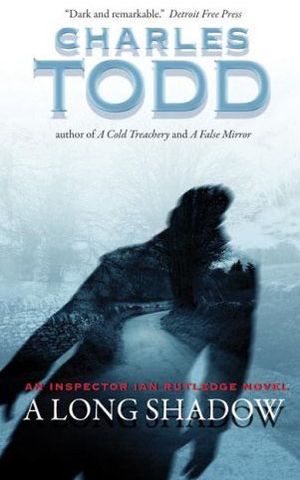 A Long Shadow is one of nine mystery novels featuring Inspector Ian Rutledge written by an American-based mother-and-son writing team.

Rutledge, who works for Scotland Yard, survived the trenches of the Great War but the horrors of the battlefield still plague him and he is haunted by the ghost of a soldier friend who did not return.

In this evocative novel set in London and rural England in 1919, Rutledge is being stalked by someone who keeps leaving brass cartridge casings for him to find, an eerie reminder of his former life on the battlefield.

At the same time, he is sent to a small Northamptonshire village to investigate an attack on a local constable, shot in the back with a bow-and-arrow in Frith Wood which is said to be haunted by Saxon ghosts.

But all is not what it seems and before long Rutledge is embroiled in another mystery involving the disappearance of a teenage girl, who is believed to be buried in the woods, several years before.

Are these incidences — the casings, the constable’s attempted murder, the girl’s disappearance — all linked and, if so, by what?

A Long Shadow is one of those good old-fashioned murder mysteries that keeps you guessing pretty much all the way through it. Things only begin to fall into place when you’re about 50 pages from the end.

The plotting is very good, although some scenes felt slightly laboured and I wasn’t sure of the point of one or two characters, particularly a Mrs Channing, an acquaintance of Rutledge’s who comes all the way from London to spend a few days in the village. If she has any romantic intentions these are not explained, which only makes me wonder whether she might play a more prominent role in a future novel of this same series?

But the real strength of this novel is the historical setting. The aftermath of the Great War infuses this story with a gentle kind of horror, and Rutledge, who has his own ghosts to contend with, is an effective channel for the psychological pain and suffering of a generation. He is a beautifully drawn character, a man with a strong moral compass who is wracked by guilt but never able to articulate it in any meaningful way. The only thing that grated was his constant conversations with the ghost of his dead soldier friend; I thought this device was overdone and a case of less is more might have curbed this slight reader irritation.

On the whole A Long Shadow was an enjoyable read and if the other books in this historical series are just as good I’ll definitely be reading more of them.

2 thoughts on “‘A Long Shadow’ by Charles Todd”