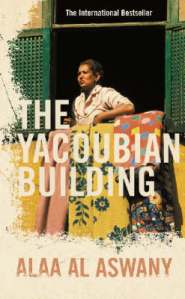 The Yacoubian Building has been a best seller in its native Egypt and throughout the Arabic world since publication in 2002. It was translated into English in 2004 but has come to more prominent attention because it was made into a film of the same name last year. This hardcover edition was published in 2007.

Set in downtown Cairo at the time of the 1990 Gulf War, this intriguing novel shows modern Egyptian life through the eyes of a diverse range of characters, all of whom live in an apartment block called the Yacoubian Building.

Similar in style to Nicholas Rinaldi’s Between Two Rivers, which is set in a Manhattan residential building, it charts the struggles of a wide cross-section of society, from the underclass that live in cramped conditions in converted storage rooms on the roof of the building, to the wealthy residents who inhabit the building’s individual apartments.

There are so many characters in the book that a list is printed at the front for reference. The main ones include: a wealthy and elderly playboy (Zaki Bey el Dessouki); a bright and ambitious young man who wants to enter the Police Acadamy but joins a militant Islamist organisation instead (Taha el Shazli); a beautiful girl who supports her family by taking a poorly paid job in a clothing shop which is run by a man who expects sexual favours (Busayna); a shirtmaker and petty schemer (Malak); the gay editor-in-chief of a French language newspaper (Hatim Rasheed); and a self-made millionaire who has a secret second marriage to satisfy his ever-present libido (Hagg Muhammad Azzam).

Each of these characters are incredibly interesting in their own right — with secrets to keep and struggles to overcome — but Aswany makes things more intriguing by having some of them bump into each other in often surprising and unpredictable ways. While this helps drive the narrative forward, it also allows the reader to appreciate the apparent contradictions in Egyptian society where people with different religious, political and moral viewpoints live side by side, not always in harmony.

In fact, Aswany’s book is a highly political one, showing as it does a society rife with bribery and corruption and riddled with poverty and violence, the result of a political system dominated by a single party. Here, the disenchanted populace dream of escape to foreign lands to live better lives. Some also see Islamic extremism as a viable method of creating a better society.

Western readers may also be shocked at the role that women are forced to play in this culture. They are not only objectified but they are conditioned to believe that it is up to them to modify their behaviour in order to meet the sexual demands of the male population. If that means you need to put up with your boss’s advances at work, then so be it, there’s no such thing as sexual harrassment here.

There’s no doubt that The Yacoubian Building is a powerful, thought-provoking and controversial read, but it’s also an entertaining and enlightening one, and I was sad when it came to an end. I very much recommend it, particularly if you want to experience an eye-opening glimpse of a culture not widely written about in western literature.

10 thoughts on “‘The Yacoubian Building’ by Alaa As Aswany”