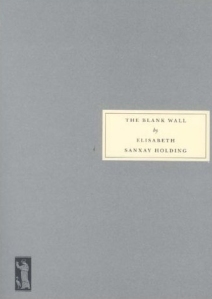 This book should come with a warning: make sure you have an entire afternoon free to read this, because you won’t be able to put it down. Honestly.

The Blank Wall, no. 42 in Persephone’s book list and first published by Simon & Schuster in 1947, is a nail biting thriller set in the United States during the Second World War. I read it in a matter of hours and felt myself holding my breath much of the way through it, as I was never certain what was going to happen next. It is, as the Observer called it, a “classic of suspense fiction”.

Lucia is a 38-year-old housewife and mother. Her husband, a Navy man, is away at war in Europe, and she is left to run the household, comprising her elderly father, 17-year-old Bee and a 15 year-old David, with help from her faithful maid, Sibyl.

The family has recently moved to a new house by a lake and are still settling in to the neighbourhood, when Lucia discovers that Bee is going out with a “quite sinister-looking character” more than twice her age. This throws Lucia into a kind of spin: she makes a special trip to New York to warn off the boyfriend and then, one morning, finds him dead in the motorboat moored behind the family’s boathouse. She immediately suspects her father has murdered him and then embarks on a not very well thought out plan to cover up the crime…

This is a thoroughly entertaining read about one woman’s struggle to manage events that are seemingly beyond her control. Lucia is a charming all-too human character, whose honourable (if naive) intentions to protect her family adds a distinctly domestic edge to the drama. Her interior monologues, which form much of the narrative, provide an insightful glimpse of her sometimes tortured mindset: she wants to safeguard her family’s way of life but is all too aware that it could all go wrong if she makes one little slip-up.

Sanxay Holding imbues the text with much social commentary — including the role of women, class, race and educational background — but this never feels heavy. Indeed, it’s the opposite: effortless and seamless.

As strange as it might sound to describe a thriller as delightful, it is the first word that springs to mind when I think of The Blank Wall. A wholly gratifying and pleasurable read.

5 thoughts on “‘The Blank Wall’ by Elisabeth Sanxay Holding”