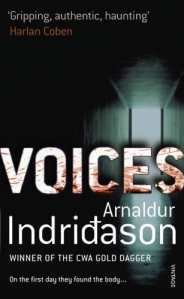 Voices is the third Arnaldur Indriðason book to be translated into English featuring the troubled detective Erlunder. Set in the Icelandic capital, Reykjavik, it’s a powerful police procedural that pulls no punches in its depiction of a sordid crime and its aftermath.

The story opens with the murder of a hotel doorman in the room in which he has lived for the past 20 years.

The man was sitting on the bed, leaning against the wall. He was wearing a bright red Santa suit and still had the Santa cap on his head, but it had slipped down over his eyes. A large artificial Santa beard hid his face. He had undone the thick belt around his waist and unbuttoned his jacket. Beneath it he was wearing only a white vest. There was a fatal wound to his heart. Although there were other wounds on the body, the stabbing through the heart had finished him off. His hands had slash marks on them, as if he had tried to fight off the assailant. His trousers were down round his ankles. A condom hung from his penis.

Erlunder, together with the help of his two colleagues, Sigurdur Oli and Elinborg, immediately launches an investigation into the crime, but this is hindered on two fronts: first, no-one seems to know much about the victim despite the fact he had worked at the hotel for so long; and second, the manager wants the crime to be hushed up to save the hotel’s reputation and to “avoid arousing fear among the guests”.

This is all complicated by the time of year: it’s Christmas and the hotel is packed with rich foreigners “most of them tourists wearing traditional Icelandic sweaters, hiking boots and thick winter clothing”.

The investigation takes place over five days (each of the days is a section of the novel) during which Erlunder holes up in the hotel, taking a room in which the radiator does not work, in order to thoroughly immerse himself in finding out what happened. But this also allows him to avoid the pain of spending another Christmas at home alone with his wayward daughter, Eva Lind, a recovering drug addict. This lends the book an especially claustrophobic atmosphere, because the world outside barely intrudes on the hotel, its secretive staff, the guests — one of whom is under suspicion — and the piecing together of clues.

But the Santa murder is not the only narrative thread in this wholly gripping novel. In a second, interwoven storyline, Elinborg pursues a case in which a young boy is hospitalised after he was beaten up by school bullies. She firmly believes the father is the culprit and does all she can to prove her theory.

Meanwhile Erlunder slowly patches up his relationship with his daughter, revealing some of his inner demons — specifically the grief surrounding the death of his younger brother when Erlunder was 10 — for the first time. He also warms towards a female biotechnician helping out on the case and allows himself to go on a proper date, the first since he divorced his wife 25 years ago!

These additional elements do not, however, detract from the heart of the story. If anything, they enhance it, because it gives Indriðason the chance to really flesh out his characters, to explore their own troubles and heartaches, to make them more three-dimensional and real. To achieve this without sacrificing plot or narrative drive is quite an achievement.

It’s also quite an achievement to write a novel with three diverse storylines centred on one theme — the death of childhood — without knocking the reader over the head with it. And to neatly tie up everything at the end and to present a solution to the crime that had not once occurred to me (I usually guess these things long before the last page), also says a lot about the author’s talent as a crime writer.

On the whole Voices is a gripping read, intelligently written and plotted, that is emotional without resorting to sentiment or reader manipulation, and is satisfying without being formulaic or predictable. More please.

4 thoughts on “‘Voices’ by Arnaldur Indriðason”