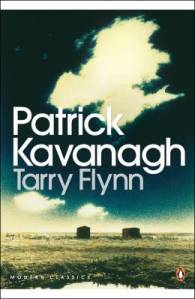 Patrick Kavanagh (1904-1967) is best known as an Irish poet, but he also dabbled in fiction. Tarry Flynn, first published in 1948, is perhaps his most popular and most famous novel. It is set in rural Ireland in the 1930s and tells the story of a young farmer’s day-to-day desires: women, nature and poetry, not necessarily in that order.

On the face of it, this book does not have much of a plot. It’s essentially a series of vignettes, held together by the passing seasons, but it is written in such beautiful, evocative prose, it’s difficult to find fault with the narrative. There’s a quiet, understated grace to every sentence that makes it a powerful and affecting read. I never thought I would say this, but I loved this book so much I’m afraid the late John McGahern, my favourite Irish writer and possibly my favourite writer per se,  has a rival for my affections.

There are lots of similarities in style and content — I rather suspect that McGahern (1934-2006) drew inspiration from Kavanagh’s work — but it is their shared ability to find beauty in the simplest of things, in the mundane tasks of people’s lives, that I love so much.

In Tarry Flynn, the farmer of the title, Kavanagh creates a character that is also able to find beauty in a world that he finds otherwise perplexing.

He stooped down under the belly of the animal to catch the girth strap and as he did he caught a glimpse of the morning sun coming down the valley; it glinted on the swamp and the sedge and flowers caught a meaning for him. That was his meaning. Having found it suddenly, the tying of the girth and the putting of the mare in the cart and every little act became a wonderful miraculous work. It made him very proud too and in some ways impossible. Other important things did not seem important at all.

Walking in the meadow in summer was a great excitement. The simple, fantastic beauty of ordinary things growing — marsh-marigolds, dandelions, thistles and grass. He did not ask things to have a meaning or to tell a story. To be was the only story.

In fact, Tarry is so awe-struck by the fields and flowers and changing seasons that he believes that the “Holy Spirit was in the fields” and that religion is “beauty in Nature”. When he shares these views with his overbearing mother, she feels that there is a “kink in him which she never had been able to fathom” and that he spends far too much time with his head in the clouds.

And he was forever reading and dreaming to himself in the fields. It
was a risk to let him out alone in a horse and cart. The heart was
often out of her mouth that he’d turn the cart upside down in a gripe
while he was dreaming or looking at the flowers. And then the shocking things that he sometimes said about religion and the priests. She was very worried about all that. Not that she loved the priests — like a true mother she’d cut the Pope’s throat for the sake of her son — but she felt the power of the priests and didn’t want to have their ill
will.

Tarry, who is fast approaching 30, is one of those bachelors to whom the Mission is aimed. But he has never even kissed a girl, much less gone “all the way” and so the Church’s crusade is pretty much a lost cause as far as he is concerned. Indeed, it tends to backfire a little because as he moulds the potatoes one morning…

…his mind drifted to a new excitement by the thought of all the strange girls that would be coming to the Mission. It often worried him that a lot of other men might be as hypocritical as himself. He, when he analysed himself, knew that he went to religious events of this kind mainly to see the girls.

While the book has dark overtones — the Mission and the Catholic Church’s control of every aspect of village life is pivotal to the story — it also contains some light-hearted scenes and there’s a gentle witticism that pervades much of Tarry’s escapades, especially his dispute with a neighbour over the purchase of a field.

All in all, this is a lovely, gentle story about one man’s struggle to rise above the burden of family, farm and lust, all set in the idyllic surrounds of 1930s rural Ireland.