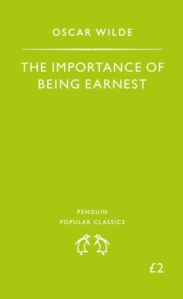 In my quest to read more work by Irish literary greats, I recently purchased a newly repackaged Penguin Popular Classic version of Oscar Wilde’s 1895 play The Importance of Being Earnest. This edition, with its vibrant green cover and tracing-paper thin paper (all 100 per cent recycled), retails for a meagre £2 — that’s a damn cheap price for a masterpiece, in my opinion.

I don’t normally read plays (as the 200-plus reviews on this blog will attest), but I decided to make an exception in this case. (Well, to be honest, I’d already read The Picture of Dorian Gray back in my early 20s and because there’s a distinct lack of other novels in Mr Wilde’s back catalogue I wasn’t left with much choice.)

I had seen a film version of this play a couple of years ago (the 2002 version starring Rupert Everett, Colin Firth, Frances O’Connor, Reese Witherspoon and Judi Dench) and I remember laughing out loud at a lot of it. But seeing the words in black-and-white print makes them seem even funnier — if that is possible.

For those who don’t know the storyline, the brief synopsis goes something like this: Country gentleman Jack Worthing invents a younger brother, Ernest, whom he pretends to be when he visits the city. This gives him free reign to pursue the beautiful Gwendolen. Meanwhile his city-based friend, Algernon Moncrieff, invents a poorly relative, Bunbury, whom he pretends to visit in the country in order that he can leave his dull city existence behind for a bit of fun and frivolity. One day Algernon pretends to be Ernest and visits Jack’s pretty charge, Cecily, in the country, which leads to all kinds of confusion about identity. Obviously, Jack is not happy, but when his own deceptive behaviour is called into question, the scene is ripe for much farce and hilarity.

In three short acts, this play delivers so many laughs and classic one-liners it’s difficult to appreciate the genius of it in just one reading. Fortunately, it’s short enough — just 67 pages in this edition — to read cover-to-cover twice in a very short amount of time.

How many people haven’t heard this line (delivered by Lady Bracknell to Jack)?

“To lose one parent, Mr Worthing, may be regarded as misfortune: to lose both looks like carelessness.”

Or this one (delivered by Gwendolen to Cecily):

“I never travel without my diary. One should always have something sensational to read in the train.”

But it’s not just the lines which are funny, but the setting and the ways in which they are delivered that makes certain scenes especially comedic. This scene, in which Cecily serves tea and cake to her new rival in love, Gwendolen, is a good example of Wilde’s ability to capture the little details in people’s behaviour that conveys so much about their character and mood.

Gwendolen [superciliously]: No thank you. Sugar is not fashionable any more. [Cecily looks angrily at her, takes up the tongs and puts four lumps of sugar in the cup.]

Gwendolen [in a bored manner]: Bread and butter, please. Cake is rarely seen at the best houses nowadays.

Cecily [cuts a very large slice of cake and puts it on the tray]: Hand that to Miss Fairfax.

Without wishing to wax lyrical, this is a sumptuous, dazzling read — a wonderfully clever farce to brighten up the dullest day. It’s tightly written, with not a word wasted, and there’s a delightful conclusion in which all the lose ends are brought together and tied up with an unexpected flourish. Masterpiece, indeed.

5 thoughts on “‘The Importance of Being Earnest’ by Oscar Wilde”