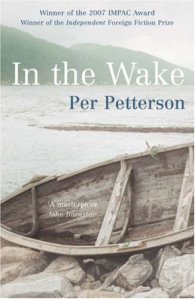 Judging by the amount of Scandinavian crime fiction hitting our shelves these days, anyone would be forgiven for thinking that this was the only genre Scandinavian writers were capable of creating. Thank goodness, then, for Per Petterson. This Norwegian writer has penned one short-story collection and six novels, although only two have been translated into English (a third, In Siberia, is due out at the end of the year) and they are as far from crime thrillers as you can imagine.

The beautiful, introspective Out Stealing Horses was published to critical acclaim in its native Norway in 2003, but it didn’t hit the big time until it was translated into English and scooped the Independent Foreign Prize for Fiction in 2006. Suddenly Norway’s best kept literary secret was out of the bag and English-language readers like me clamoured for more. Cue the translation of In the Wake, a novel that predates Out Stealing Horses by three years, but which feels more accomplished and — if it is possible — more touching, more painful and more despondent.

Like Trond in Out Stealing Horses, In the Wake features a male narrator trying to come to terms with painful events from his past.

The book opens with Arvid, a 43-year-old divorced father of two, standing outside a bookshop where he once worked. He is confused and disoriented, and can’t understand why his hands are grazed and why it hurts so much to breathe. And then he remembers the one tragic event that he has been trying to escape for the past six years: the deaths of his parents and two younger brothers in the Scandinavian Star ferry disaster…

What follows is a story told stream-of-consciousness style as Arvid pieces together those missing years and looks back on the strained relationship he had with his father, a very physically fit and strong man who had little respect for Arvid’s love of books and writing, and his older brother, the only member of his family who was not on board the boat that fateful night.  (Tellingly, his mother and his two younger siblings rarely enter his thoughts).

When his 46-year-old brother announces he’s about to get a divorce and then tries to kill himself by drinking “a bottle of port and a hundred Sarotex”, Arvid is forced to confront the reasons why the two have grieved in different ways. This memory, of the pair sailing in a boat with their father, says it all:

I turned and stood there looking straight across the fjord to Oslo while the ice floe gently rocked, and my brother was staring stiffly back at the rowing boat and at my father, and I think that is the difference between my brother and me, that in spite of size and age he always looked back while I looked straight ahead, and this is the way it has always been.

And this account, told to a nurse, sums up how the two brothers viewed the tragedy from different perspectives:

And then I tell her of the discussions we have had since then, my brother and I, about how they died, my two younger brothers and my mother and my father, and I have said it again and again, that they were asleep and died from the smoke and never knew what happened to them, while he is convinced they were awake and tried to get out, and then could not because the flames were so fierce at that particular place in the boat and the smoke was so thick, and he cannot stop thinking about what their thoughts were just then, what their last feelings were, and I have said it does not do any good to go on thinking like that.

In the Wake is a book about loss — loss of family members, loss of dreams, loss of self — and how we handle it. But it’s also a book about family relationships, in particular between fathers and sons, and how these bonds, good and bad alike, do not break, even in death.

It’s a quietly devastating read, but one that is not without hope. Arvid may be reclusive but there are touching scenes in this book — between the Kurdish neighbours he befriends and the attractive woman across the road with whom he develops a small love affair — that indicate he is ready to tentatively re-enter the land of the living after a long period of bereavement. And there’s the odd witty scene that breaks up the unbearable sadness of the novel.

I found myself unable to stop thinking about this book whenever I put it down. Despite the narrative comprising an endless succession of disjointed memories, Petterson manages to weave them together seamlessly, so you feel like you have entered someone else’s dream-thoughts. That is quite a stunt to pull off, though whether this says more about Petterson’s writing style or Anne Born’s translation, I do not know. Whatever the case, In the Wake is a highly recommended read and one I won’t forget in a hurry.

3 thoughts on “‘In the Wake’ by Per Petterson”