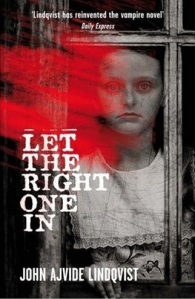 Let The Right One In is by John Ajvide Lindqvist, a relatively new Swedish author who has made a name for himself as a horror writer.  This, his debut novel, was published under the title Låt den rätte komma in in 2004 and quickly became a bestseller in the author’s homeland. Now translated into English by the independent, London-based publisher Quercus, the book is set to win over an international audience of horror fans.

Like most new horror writers who achieve some measure of commercial success, Lindqvist has been compared to Stephen King. There’s no doubt that there are some similarities. Aside from the subject matter, there’s a complex cast of characters, a small-town setting and a child protagonist, all of which come straight out of the Stephen King school of fiction writing.

But Lindqvist manages to capture something that King doesn’t. There’s an intelligence that resonates off the page. And maybe because it’s Swedish, there’s a sense that the author is making some kind of social commentary about the places and the circumstances in which some people are forced to live. The book, set in a depressing sink estate, is populated by drunks, glue-sniffers and people on disability benefits.

Lindqvist also tackles a specific element of the genre that King, to my knowledge, has never tackled: the vampire.

On the cover of my edition, the Daily Express says that “Lindqvist has reinvented the vampire novel”. Normally I wouldn’t hold much stead in anything a British tabloid newspaper said about a book, but in this case I concur. It’s got a delightfully different twist, one in which you find yourself egging on the vampire to get away with its despicable blood-sucking habits.

The vampire is actually a pretty girl called Eli. She looks 12 but is actually more than 200 years old. She lives with her ‘father’, a teacher turned paedophile, in an apartment in Blackeberg, a fully planned suburb on the western outskirts of Stockholm.

One evening Oskar, a 12-year-old boy who lives next door, befriends her in the playground. She warns him that they can never be friends and that he should stay away from her.  But Oskar, who is bullied at school, wets his trousers and is estranged from his drunken father, is desperate for friends and won’t take no for an answer.

Together, the two of them send Morse code messages through their shared bedroom-wall, and forge an unlikely alliance.

Meanwhile, the residents of Blackeberg and surrounding suburbs are living in a state of fear following a series of strange murders. The paranoia grows when the corpse of a missing man is found in a frozen lake. And then things take on an even more frightening twist when Virginia, a 50-year-old woman, is attacked by a child who drops out of a tree and wounds her neck.

Cue more chills and spooky music when Eli’s father, who murders children to supply her with fresh blood, is caught abusing a young boy in a cubicle at the local swimming pool. He douses his face with acid to ensure he can’t be identified, but manages to survive even though his face has been reduced to a mass of burnt flesh, with just one eye and a black hole for a mouth.

It’s all very creepy, but it does take a long time for the narrative to really take effect, perhaps too long, because Lindqvest seems to take forever to set everything in motion. The reader must reach page 248 before Oskar twigs on to the fact that Eli is not all that she seems:

What’s wrong with her?

The thought had come to him even as he was in the cellar gathering the bottles together and wiping the blood away with a piece of cloth from the garbage: Eli was a vampire. That explained a lot of things.
That she was never out in the daytime.
That she could see in the dark, which he had come to understand she could. […]
That she had needed an invitation to come into his room. […] And he had invited her in. A vampire. A being that lived off other people’s blood.

Once this realisation occurs, the momentum does pick up, and the last 100 or so pages are particularly thrilling as the book reaches its gruesome climax.

The vast array of characters, many simply introduced for the purposes of a vignette and never to reappear again, also contributes to a mild sense of confusion and an unwarranted complexity. It doesn’t help that some of the major characters, such as the drunks that live on the estate, are very thinly drawn so that you don’t get a proper sense of who they are.

But one of the book’s strengths is its period setting. The year is 1981, and, unlike David Mitchell’s Black Swan Green which is set the year after, the period references are not laboured, but dropped in every now and then just to remind you: Oskar buys a Walkman; he has the double-album Alive by Kiss but thinks Destroyer is better; he plays with a Rubik’s cube and watches The Muppets on TV; the school bullies make him scream the catch-phrase from the movie Deliverance; and a Soviet submarine runs aground on the Swedish coast. It’s subtle but effective.

Of course, the friendship that develops between Eli and Oskar is also another of the book’s strengths. It’s the unexpected tenderness that gives the story its special flavour. Ditto for the terrified schoolboy fascinated by violent acts (Oskar keeps a scrapbook of news stories about serial killers) struggling to reconcile his love for a vampire who carries out such acts.

This is an intelligent, knowing novel, not short on thrills and chills, but one which requires patience and commitment on behalf of the reader. But if you’d rather watch the movie, you shouldn’t have too long to wait. According to wikipedia, it won the 2008 Tribeca Film Festival Founders Award for Best Narrative Feature and collected the Rotten Tomatoes Critical Consensus Award at Edinburgh Film Festival.

Oh, and just for a bit of trivia, the author is a huge fan of the British singer Morrissey, from which he “stole” the name of the book, although the Morrissey song is actually called Let The Right One Slip In. Perhaps an error in translation, then?