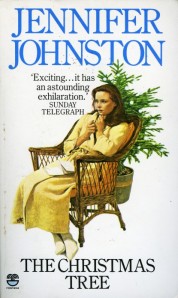 As I work my way slowly but surely through Jennifer Johnston’s rather extensive back catalogue — 15 novels at last count — I’m constantly surprised and delighted by the quality and consistency of her writing. This one, first published in 1981, only serves to confirm my high opinion of her under-appreciated talents. In fact, no sooner had I finished this than I wanted to turn back to the first page and read it all over again because I so thoroughly enjoyed it.

Judging by the title alone The Christmas Tree sounds like it could be sentimental claptrap — and the somewhat dated illustration on my cover doesn’t do much to dispel that assumption. But this is truly a case of never judge a book by its cover, because what lies within is an exquisitely written tale about an Irish woman who returns home to die, and not once does Johnston resort to mawkishness or saccharine touches to achieve a deeply affecting story.

As ever, Johnston treats her readers with intelligence and lets them fill in a lot of the gaps. She’s not one to spell things out — she does a lot of show and not much tell — and I like that kind of approach, although, admittedly, it may not be for everyone.

For most of The Christmas Tree I was trying to figure out the year in which the story was set. Beyond the odd clue here and there — a pair of old fur-lined boots in the cloakroom “that my mother must have bought some stage during the war, when to keep warm was more important than to look elegant” and a Polish Jew whose deformed fingers were broken by soldiers who “should have really killed me too” —  I could only assume it was not long after the Second World War.

What we do know is that the London-based lead character, Constance, 45, is a failed writer and
suffering from leukemia diagnosed shortly after the birth of her first child. She’s returned to her childhood home in Dublin — now lying empty after the death of both parents — to die on her own terms. Her infant daughter is in the care of an older sister, Bibi, who is bossy, prone to fussing and can’t understand her refusal to go to hospital.

Here, with a whiskey bottle for company, Constance writes to her child’s father — Jacob Weinberg, a Polish Jew she met on a sojourn to Italy — to tell him that he now has a daughter. While she waits for his response, she arranges for a live-in carer, 18-year-old Bridie, to take charge of the house and to help her work on her final book, which she wants to be published posthumously. Meanwhile all medical care is delivered by Bill, a former boyfriend, now family doctor.

This may seem like a rather dull premise for a book, but Johnston makes it sing by employing three interwoven narrative threads that reveal little nuggets of information that make you want to read on and on. The first narrative — told in first person from Constance’s point of view — is about her impending death as Christmas slides ever closer; the second is about her rather spontaneous romance with Jacob Weinberg in Italy; and the third is a kind of look-back on Constance’s familial relationships with a kind but distant father, a cold somewhat uncaring mother, and an overbearing, but more popular, sister.

You get the sense that Constance, a headstrong, stubborn and independent woman, is not prone to regrets, but as she reflects on her life she does wonder whether she has made the right decision to lead the rather solitary life that she has lead.

Suppose I had married Bill and we had gone to Connemara and had six
children, would we have been better people? Happier? Would I have
comprehended more in that isolation than I succeeded in doing in the
isolation I created for myself? Would I have been able to write, in
those circumstances, the books that I wanted so much to write?

A large part of Constance’s history is that she does not really know or understand her coolly indifferent parents, and she tries to reconcile this as she recalls specific incidents from her troubled past.

I had always felt that after my mother’s death I would find some kind of release, the awareness for the first time of an identity. It wasn’t that we hadn’t been great friends or even communicated with each other in any important way. On the contrary I had always seemed to be a source of great irritation to her, a curious disappointment. The fact that I had been born the wrong sex had been the first major setback, from which our relationship never really recovered.

Her father, a successful lawyer, was happy to support her move to London, but he remains largely unfathomable and she never feels that he truly loves her. Long after she’s abandoned the writing career for a dead end job in an advertising agency, her father comes visiting and takes her out for a meal. He then makes an astonishing admission: he once had dreams of being a writer and had enjoyed a modicum of success writing short stories and plays when he was a student at Cambridge. He gave it all up because he “lacked commitment”.

‘You look at your children as they grow, mature a bit, and will, yes, will, that somehow they will succeed in having some of the attributes that you yourself regret having lacked. At least…’ he flushed away the painful taste of
the smoked salmon with some sherry ‘…some development of the qualities that you find admirable in yourself. Is it a failure of some sort if you only see your own weakness in your children? I wonder’
She felt the question was rhetorical and didn’t say a word.

Can you imagine the pain of hearing that from your father? No wonder then that Constance has developed a rather spiky character — indeed, Jacob calls her a hedgehog: “The first signs of trabble [trouble] and you roll up into a ball and put your prickles out.” He also berates her for deflecting everything with humour. “Foolishness. Joking. Flippant joking. You are always joking, Constance,” he tells her. “I would like to see you cry.”

This is a short, all-too brief novel but all the major issues we have to confront during our lifetimes — from choosing a career to having children, from never being able to escape the past to not ever truly knowing the people we should be closest to — is encompassed within its 168 pages. There’s no doubt that The Christmas Tree is a totally absorbing tale, but it’s also one of the best I have ever read about the human condition. This is the kind of literature that makes you goggle-eyed with the sheer beauty of it. It’s not exactly a festive read, but it is a memorable one.

11 thoughts on “‘The Christmas Tree’ by Jennifer Johnston”