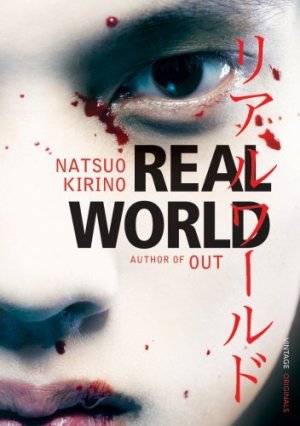 Back in 2005, I read Natsuo Kirino’s Out as part of the online reading group I used to host on this blog. It was a dark and disturbing crime thriller told from the murderers’ point of view, and while quite gruesome in places, it did mark Kirino out as a brilliant writer and I made a mental note to read more of her work as soon as it was translated into English.

I seemed to have missed Grotesque when the English translation was published in 2007, and jumped ahead to the next one, the recently translated Real World, which was originally published in Japan as Riaru Warudo in 2003.

This slim volume is an unusual read about a young, “stoop-shouldered boy” dubbed “Worm” who murders his mother and then goes on the run. There isn’t much of a plot. Instead, the novel is largely a psychological study of the murderer and the four teenage girls who band together to protect him. Each of the five characters take turns in narrating the story so that it reads like a collection of private diaries, lending the story a voyeuristic feel.

The quartet of girls are all friends from school, and each has different reasons and motivations for helping Worm. Similarly, they also have secret identities they are hiding from each other: Toshi calls herself Ninna to protect herself from the marketers and scammers; Terauchi pretends to be simple when she’s actually an abstract, intellectual, thinker; Yuzan is a lesbian; and Kirarin, the “cute, cheerful, a well brought-up, proper young girl”, is sexually experienced and has other friends outside of the four.

What emerges is a dark study of teenage alienation in modern day Japan. In fact, Toshi claims that “the sense of danger we all feel is something my mother can’t comprehend”. She elaborates further:

Walk around Tokyo and all you see are people tryng to sell you something. Tell them okay and before you know it you’ve bought something. Make the mistake of telling them your name and address and now you’re on a mailing list. Some old guy pats you on the shoulder and before you know what hits you you’re in a hotel room. Stalkers’ victims, the ones they kill, are always women. When the media was going nuts over schoolgirls getting old guys to be their sugar daddies for sex, that was the time when high school girls like us had the highest price as commodities.

There’s something deeply unsettling about the unfamiliar, somewhat seedy, world presented here, one that makes you shudder with the horror of it. But despite this there’s something clinical about the writing style that didn’t quite gel with me. I found the girls’ voices wearing and slightly false, and because I didn’t much like any of them as people I soon grew bored of the storyline. It doesn’t help that the translation appears to have been done with an American audience in mind, because the girls use lots of American slang, such as “dude”, which only makes the book seem more alien and unrealistic.

And while the book may not exactly work as a crime thriller, it does raise some interesting points about what it is like to be young in a society that treats you as a commodity. It also provides some troubling insights into the corrupting influence of peer pressure and the dark ties of friendship.