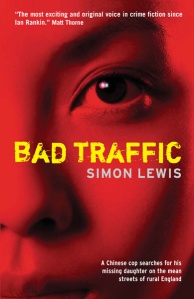 Last year Bad Traffic was named as one of 50 books that publishers felt deserved a wider audience. This week, mid-way through the book, I discovered that that list had been whittled down to 10 books to talk about and Bad Traffic had made the cut. I’m not in the least surprised. This is a brilliant edge-of-your-seat thriller and one that presents the English countryside in a dark and disturbing new light.

Set in modern day Britain, the book is about a Chinese policeman, Inspector Jian, prowling the mean streets of rural Norfolk looking for the gangster he believes has murdered his daughter. He is accompanied by an illegal immigrant, Ding Ming, who was smuggled into the country in the back of a lorry with his wife as part of a human trafficking operation. Now forcibly separated from his wife — she has been made to “pick flowers” in an unspecified location — a young and naive Ding Ming finds himself on the run from his captors.

Together the Chinese duo make for a hapless pair of vigilantes. Jian, who does not speak English, finds everything about Britain rather sinister and foreboding, and regards the local police force with much suspicion. Despite his own police badge, he becomes a kind of foreign outlaw, with just one goal in mind: to deal out his own form of justice regardless of the consequences.

Meanwhile, Ding Ming, struggles to come to terms with the fact that he’s been sold a lie. He had thought coming to England would allow him to earn a lot of money to help his struggling family at home — after he had paid the exorbitant fee to his smugglers first — but now realises he has been caught up in a corrupt system run by corrupt men.

And while Jian is hell bent on finding Black Fort, the man at the head of the smuggling ring, Ding Ming wants to keep his distance from him. This tension between the two characters makes the narrative work on a new level, because, as a reader, you’re not sure which man to support and cheer on.

At times the plot strays into comedic territory as one or the other deals with an unfamiliar culture. For example, Ding Ming is especially scared of anyone in uniform, believing English police trade body parts of criminals for organ donation, until Jian points out that one set of uniforms belongs to an automobile roadside rescue firm and there’s nothing to be frightened of.

I also enjoyed this exchange between the pair while travelling by car along a motorway. Jian begins by asking, “What are you looking at?”:

“Cows.”
“Where?”
“They’re all over. You spot one and then you see lots, like mushrooms. I don’t like them. They look selfish.”
“What are you talking about?”
“One of those cows has more land than a Chinese family. It’s disgusting. And another thing. I look out and all I see are cow fields. Where are the vegetables? And where are the factories and the mines? It doesn’t add up.”
“The fields and factories and mines are in other countries.”
“They’re cow people.”
“What are you talking about now?”
“They’re like their big stupid cows. Their life is the easiest it is possible to imagine: they wander around their lovely park all day  going munch munch munch. Nothing to worry about, just munching the stupid grass all day long in a lovely big field. And people like me, we are the rats. We live in the ditch and eat shit and watch out for the hawks, and our life is bitterness and struggle, and we’re terrified all the time.”
“Rats don’t eat shit.”

Ultimately, Bad Traffic is a brilliantly paced and well constructed story that speeds along at a terrific pace. It has plenty of thrills and spills throughout, but underpinning it all is a quietly disturbing and shocking expose on an issue I’ve not ever read about in contemporary fiction — that of human trafficking and the terrible fate so many desperate people find themselves in. This is great entertainment, but there’s a dark moral to this story and one that leaves a deep impression long after the heart-hammering conclusion has been reached. This is definitely a story that deserves a wider audience — read it if you get a chance.