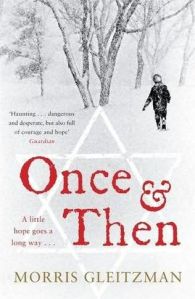 Morris Gleitzman is an English-born Australian-based writer with more than 20 childrens’ books to his name. This book, packaged as an “adult edition” brings together his two Holocaust novels — Once, first published in 2005, and Then, first published in 2008 — for the first time. Fittingly, it’s released today (August 6) to coincide with the 70th anniversary of the outbreak of the Second World War.

I’ll have to admit that when this one arrived on my doorstep a month or so back I was a little skeptical: surely it was just jumping on the Holocaust bandwagon already set in place by John Boyne’s The Boy in the Striped Pyjamas and Markus Zusak’s The Book Thief (both of which I loved)? What could yet another childrens’ novel tell us about the Jewish experience during the Second World War? Hadn’t it all been said before? And why wasn’t Penguin re-issuing Esther Hautzig’s true life story The Endless Steppe instead, a book I adored when I was a pre-teen and still remember with an aching fondness?

Casting my cynicism aside and holed up in my sick bed bed, I decided to give this one a go because it probably wouldn’t tax the brain matter too much. I figured I’d probably read the first 50 pages and then make a judgement call. I got so swept up in the story about a 10-year-old Jewish orphan, Felix, and his gutsy little non-Jewish friend, Zelda, that I read the book cover-to-cover in a matter of hours. And then wished I hadn’t ploughed through it so furiously because I wanted to spend more time in the company of these wonderful, inspiring characters.

A fresh perspective on the Holocaust

The beauty of Once & Then is its ability to present the Holocaust in a fresh way — that is, from the perspective of a young boy who fails to comprehend the violence and brutality around him. Of course, Boyne does this in The Boy in the Striped Pyjamas, but Gleitzman tackles it from a slightly different angle: a Jewish boy who doesn’t even remotely understand that it is his very religion that puts him in danger.

Indeed, when the book opens Felix’s naivety is crystal clear: he truly believes he is only residing in a Catholic orphanage, not because his parents are dead, but because they are trying to sort out their problems as Jewish booksellers before coming back to rescue him.

There were two reasons Mum and Dad chose this orphanage, because it was the closest and because of Mother Minka’s goodness. When they were bringing me here, they told me how in all the years Mother Minka was a customer of their bookshop, back before things got difficult for Jewish booksellers, she never once criticised a single book.

His innocence is all the more apparent when you realise he’s being carrying this false hope with him for three years and eight months, and yet it remains undiminished. His only fear is that when his parents return they won’t recognise him because he’s changed so much in that time.

But the tables are turned when a group of Nazis arrive one day to burn all the Jewish books in the orphanage’s library. Felix suddenly realises that he needs to rescue his parents, not the other way around.

There’s a gang of thugs going round the country burning Jewish books. Mum and Dad, wherever in Europe they are, probably don’t even know their books are in danger.
I have to try and find Mum and Dad and tell them what’s going on.
But first I must get to the shop and hide the books.

This sets Felix off on an amazing voyage of discovery in which he escapes the orphanage and begins a new life on the run. Along the way, he collects a sidekick, a six-year-old girl, whom he rescues from a burning farm. Together Felix and Zelda form a formidable duo, a kind of brother-sister act that endures all kinds of highs and lows as they try to survive everything the Nazi regime has to throw at them.

To supply any more detail would spoil the plot, because the enjoyment of reading Once & Then is letting the adventure unfurl page by page, and experiencing the adrenalin rushes, the shocks and the tears that this brings. There’s plenty of laughs in the book, too, a delightfully naive child-like humour that softens the blows of what would otherwise be a terribly dark and depressing story.

But the best part, especially for book lovers, is the infectious enthusiasm for storytelling that exists within Felix and his undying love for British writer Richmal Crompton and her humorous Just William stories.

I clamber over the beds and squeeze onto the floor and take a book from the shelf. Just William by Richmal Crompton. It’s still one of my favourite books in the whole world. As I open it I try not to remember Mum and Dad reading it to me.
Instead, I read a bit to myself. About William’s dog. He’s called Jumble and he’s a mixture of about a hundred different dogs and William loves him even when he pees in William’s new boots.
Mum and Dad said I can have a dog like Jumble one day.
Stop it.
Stop thinking about them.
William is training Jumble to be a pirate. That’s what I love about William. He always stays hopeful, and no matter how bad things get, no matter how much the world turns upside down, his mum and dad never die.
Not ever.
I know I should be getting back, but I can’t get up at the moment. All I can do is stay here on the floor, with Just William and Zelda’s carrot, thinking about Mum and Dad and crying.

Once & Then is a powerful story about the strength and resilience of the human spirit. It’s about courage and hope, and surviving against the odds. And while it tackles one of the darkest times in 20th century history, Gleitzman does it sensitively without losing any of the important detail. There’s plenty of death here, and cruelty, but it’s not sensationalist or gratuitous. “This story is my imagination trying to grasp the unimaginable,” he writes in his afterward. I think he’s achieved it.

21 thoughts on “‘Once & Then’ by Morris Gleitzman”