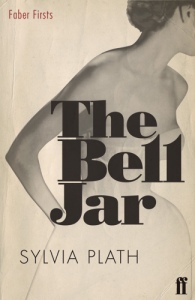 Fiction – paperback; Faber and Faber; 240 pages; 2009. Free copy for our Book Group courtesy of the publisher.

I first read Sylvia Plath’s one and only novel, The Bell Jar, as a young 20-something, when I was hugely unsure of my place in the world. Indeed, I’d graduated but my career prospects were thwarted by a massive recession (it was 1991) and I was making ends meet by working part-time in a book shop. Reading The Bell Jar was a rewarding experience, because the main character, Esther Greenwood, was also coming to terms with her place in the world — or not coming to terms with it, as it turned out. As I read about Esther sliding further and further into depression, I realised my life wasn’t so bad after all. But I did find The Bell Jar very dark and bleak.

Reading the book for the second time round, almost 18 years later, I was struck by how little of it I remembered. And it also seemed far less depressing. Indeed, there were many moments when I laughed out loud. Here’s a case in point: Esther and a colleague catch a yellow cab back to their hotel after a party, and this is what ensues:

The cab driver took the corners with such momentum that we were thrown together first on one side of the back seat and then on the other. Each time one of us felt sick, she would lean over quietly as if she had dropped something and was picking it up off the floor, and the other one would hum a little and pretend to be looking out the window.

But I digress… For those of you who are unaware of the storyline, it goes something like this: It is 1953. Esther Greenwood is a first-rate student from rural America who wins a college scholarship along with the opportunity to spend a month in New York city as an intern on a fashion magazine. But during her time in Manhattan with 11 other young female interns, Esther slowly realises that she can no longer define herself by her academic accomplishments. The world, as she knows it, is coming to an end and she doesn’t quite know how to handle it. Or, as she describes it, she “felt like a racehorse in a world without racetracks”.

When she returns home, she discovers that her application to join a writing course over the summer has been rejected, and depression sets in.

I saw my life branching out before me like the green fig-tree in the story [that she had read].
From the tip of every branch, like a fat purple fig, a wonderful future beckoned and winked. One fig was a husband and a happy home and children, and another fig was a famous poet and another fig was a brilliant professor, and another fig was Ee Gee, the amazing editor, and another fig was Europe and Africa and South America, and another fig was Constantin and Socrates and Attila and a pack of other lovers with queer names and off-beat professions, and another fig was an Olympic lady crew champion, and beyond and above these figs were many more figs I couldn’t quite make out.
I saw myself sitting in the crotch of this fig-tree, starving to death, just because I couldn’t make up my mind which of the figs I would choose. I wanted each and every one of them, but choosing one meant losing all the rest, and, as I sat there, unable to decide, the figs began to wrinkle and go black, and, one by one, they plopped to the ground at my feet.

The phrase that comes to mind here is “paralysed by choice”. Indeed, as the summer drags on, Esther becomes more dejected, lost and depressed, not helped by the absence of her medical student boyfriend who has been sent to a sanatorium to recover from tuberculosis. Not that she thinks much of him anyway…

Before long, Esther is seeing a psychiatrist and admitted to an asylum. A string of failed, one might say half-hearted, suicide attempts follow, as does a course of electro-shock treatment. It all feels very bleak and depressing…although the ending is relatively upbeat.

I’ll admit that I loved the first third of the book, set in New York, much more than the sections covering her psychiatric experiences. Perhaps it’s the beautiful writing and the pitch-perfect descriptions of Manhattan where “the city hung in my window, flat as a poster, glittering and blinking” or maybe I just identified with Esther’s cynicism, her refusal to get caught-up in the shallowness of the fashion industry, the endless parties, the free gifts. She wants something more meaningful even if she hasn’t quite figured out what that might comprise…

The latter two-thirds of the book comes across a bit like one long whinge-fest. There was part of me that wanted to grab Esther by the shoulders and shake some sense into her. Sure, her aspirations aren’t being taken seriously, but why not prove what you can achieve before giving up because you don’t see the point of it all? But then, it’s hard to fully comprehend what it must have been like to be a woman in the 1950s, when society simply expected you to get married, stay at home and raise a family. How would an intellectual, creative woman, deal with making such compromises?

The Bell Jar was Plath’s only novel, because she killed herself a few weeks after it was published in 1963. Obviously, one can’t help wondering how much autobiographical detail fills its pages. Sadly, we will never know.

7 thoughts on “‘The Bell Jar’ by Sylvia Plath”