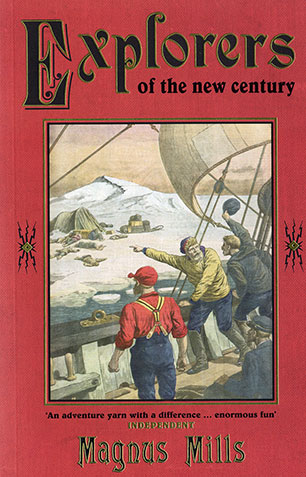 Magnus Mills is a cheeky little scamp. With a big black beating heart. He lulls you into a false sense of security before dealing you a killer blow. And you can’t help but love him for it.

Explorers of the New Century, his fifth novel, starts out as a rather fun, light-hearted story about two groups of explorers competing to reach the “furtherest point from civilisation”. One group — Scandinavian, small and efficient — follows a dry riverbed; the second — British, large and disorganised — takes a different route across an endless landscape of scree.

The narrative plods along (pun fully intended) for what seems like forever. Not much seems to happen. (Admittedly, I considered abandoning the book, because it was so slow and dull.) The Scandinavians make good progress but are constantly worried they’ll get pipped at the post, while the Brits get mired in bickering and make poor leadership decisions.

And then, somewhere around the half-way mark, Mills throws a curve ball that makes you rub your eyes and re-read the sentence to make sure you didn’t misunderstand it. Suddenly the book takes a rather kooky and surreal turn, and you begin to realise Mills must have had a great time writing this book. Either that, or he was hallucinating when he cooked up the plot.

Then, just as you’re coming to grips with this new turn of events, he delivers another surprise twist that turns everything, and I mean everything, on its head. The story, which began as a rather pedestrian (there I go with the puns again, sorry about that) narrative now becomes rather dark and sinister. It makes you see everything that’s already happened before in a new and disturbing light. It’s brilliant.

Now, for obvious reasons, I can’t reveal the exact nature of these two “twists”, but I can say that Explorers of the New Century is one of those deceptively simple novels that is part allegory, part fable and stays with you long after you’ve finished reading it.

Crucially, there’s a lot of deadpan humour in it too, which breaks up the monotony of the anorexic text. Most of it is quite subtle, but there was one exchange they caused me to laugh out loud. The British group has just set up camp and are fantasising about scones with “lashings of jam and butter”.

The tent had four occupants. Sargent was in his normal position by the door. Next to him was Summerfield, already fast asleep. Then came Seddon, and at the far end was Plover. The latter had adopted his usual pose. He was lying on his side, outstretched with his legs crossed and his head popped on one hand, facing the doorway.
He waited a moment and then said, “I think you’ll find that the  correct pronunciation is ‘scones’.”
“‘Scones’?” repeated Sargent.
“‘Scones,'” repeated Plover.
“Well, I’ve never heard that before. We’ve always said ‘scones’ where I come from.”
“Same here,” agreed Seddon.
“I assure you the word is ‘scones’,” said Plover. “You should look it up when you get the opportunity.”

Trust Mills to capture the absurdity of English people arguing about the English language!

For what it’s worth, this is a hugely enjoyable book which can be easily read in just a couple of hours, perfect if you’re looking for a quick palette cleanser between novels. It’s typical Mills fare, if a little darker than usual, so if you like this you’re sure to enjoy his back catalogue, most of which is reviewed here.

7 thoughts on “‘Explorers of the New Century’ by Magnus Mills”