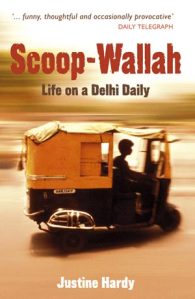 Justine Hardy’s Scoop-Wallah has just been republished after a 10-year break.

The book recounts Hardy’s year-long experience as a journalist on The Indian Express, an English-language newspaper based in New Delhi. She had gone there after a chance conversation with her local greengrocer, an expat from the troubled state of Jammu and Kashmir which straddles the India-Pakistan border. Hardy wanted to buy half a cabbage; he wanted her to go to India because he felt she’d do a better job of reporting on the state of his former home than the world’s press.

Hardy, up for a challenge, went for it. She leaves London and winds up living in one of the more fashionable areas of New Delhi.

Through family connections — her cousin married an Indian and one of their great friends had become her best friend in India — she finds a room in an apartment block overseen by a former Rajput prince. While her accommodation is far from luxurious — “two beds, a suffering sofa, a view over a dusty garden, the roar of an old air cooler” — she settles in well, travels to work courtesy of her own rickshaw driver and gets assigned quite a lot of “fluffy” articles. Her life seems very far removed from the slums and the grim poverty one might expect.

A nose for a good story

But she’s desperate to cover the serious stories instead of the society weddings and polo matches. Through sheer tenacity and badgering of her editor she eventually gets to see some of the more seedier and dangerous aspects of India.

Her journey to Assam, in the country’s north-east, is particularly telling. The main tea-growing state has an endemic terrorism problem caused by separatists who seek to rid the area of “foreigners”. Here she learns that every garden pays protection money, that the separatists get large sums under the guise of a land tax on every kilo of tea produced, and that if the company does not pay, people go missing.

She also sees the terrible working conditions of the largely female employees, while the estate manager lives a very comfortable existence in a lovely house, thank-you-very-much.

Later she gets to cover other “important” stories, such as the former high-flying journalist who’s swapped reporting for teaching children in the slums, and the middle-class belief that “education and a good salary buy immunity from AIDS”. She even goes on a side-trip to meet the Dalia Lama.

A love letter to India

At all times, Hardy generates an infectious enthusiasm and passion, not only for the immediate topic at hand, but for India as a whole.

Her book is a refreshing take on what it is like to live and work in a country that is constantly striving to reconcile its wish to modernise without losing its rich traditions so deeply rooted in the past. She peoples it with a cast of entertaining and quirky characters — her gay, alcoholic, spoilt rich-man prince is a hoot, and her jolly editor, who’s had his own hard-hitting journalistic career thwarted but never lets on, livens up the page whenever he’s mentioned. Indeed, the dialogue throughout is often hilarious.

I found Scoop-Wallah a quick, enjoyable read, one that provided an inside glimpse of the “real” India that you’d never gain from the normal run-of-the-mill travelogue. But, for personal reasons, I particularly enjoyed reading about the Indian newspaper industry and the ways in which it differs from the British press.

Please note that the book also features some of Hardy’s wonderful black and white photographs. These are scattered throughout the text rather than being sandwiched in the middle, lending the book a more personal quality.

3 thoughts on “‘Scoop-Wallah’ by Justine Hardy”