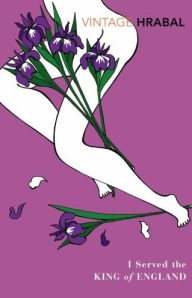 It’s not very often I read a book and feel completely ambivalent about it, but that’s how I felt when I finished Bohumil Hrabal’s I Served the King of England. I didn’t hate it, I didn’t love it, but I enjoyed reading it and am glad I tackled it, even if I’m in no hurry to read the rest of Hrabal’s back catalogue.

The story, which is set in Czechoslovakia during the late 1930s, is narrated by Ditie, an ambitious busboy at the Golden Prague Hotel, who dreams of becoming a millionaire. He supplements his income by selling frankfurters at a railway station but cheats customers out of their change by waiting until they’ve boarded the train.

Then I’d fumble about for the change, and the fellow would yell at me to forget the coins and just give him the notes. Very slowly I’d start patting my pockets, and the dispatcher would blow his whistle, and very slowly I’d ease the notes out of my pocket, and the train would start moving, and I’d trot alongside it, and when the train had picked up speed I’d reach out so that the notes would just barely brush the tips of the fellow’s fingers, and sometimes he’d be leaning out so far that someone inside would have to hang onto his legs, and one of my customers even beamed himself of a signal post. But then the fingers would be out of reach, and I’d stand there panting, the money still in my outstretched hand, and it was all mine. They almost never came back for their change, and that’s how I started having money of my own, a couple of hundred a month, and once I even got handed a thousand-crown note.

With this kind of initiative, it’s no surprise that Ditie does, eventually, make his fortune.

He changes jobs several times, moving to more prestigious hotels where he’s exposed to more affluent guests and comes under the tutelage of a maître d‘ who once served the King of England. He has various affairs with different women, including prostitutes along the way. Indeed, he has a penchant for brothels, and spends a lot of his money on prostitutes whose laps he adorns with lavish displays of flowers — peony petals, daisies, sprigs of fir or mistletoe.

He later gets the chance to serve the Emperor of Ethiopia and is presented with a blue sash and a medal, the highpoint of his career as a waiter, but then almost loses the plot — and his life — when he is accused of stealing one of the gold teaspoons used at the event.

It’s these farcical moments which makes the novel a delight to read. Much of it is incredibly funny, and even in moments of potential tragedy, it’s hard not to laugh.

But when the Germans invade Prague the narrative takes on a new, sinister dimension, in complete contrast to all that has come before. Ditie falls in love with a German gym teacher and becomes a Nazi sympathizer. It takes awhile to come to grips with this strange turn of events, but it only serves as a taster to a whole series of weird and surreal twists in the narrative ahead, including Ditie’s imprisonment for being a millionaire.

I Served the King of England is a strange, witty novel about one man’s fantastic journey from rags to riches and back again.

The book was first published in 1971 but has recently been reissued by Vintage Classics in quite a striking purple cover designed by Japanese artist Mio Matsumoto.