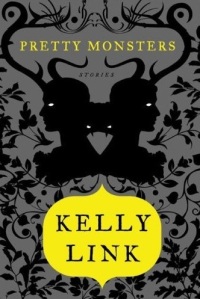 That I would give this book a five-star review comes as quite a surprise to me, because this is not the type of book to which I would normally be drawn. First, it’s a collection of short stories and novellas, and I generally have a preference for full-blown novels. Second, its target market is young adults/teenagers. Third, it’s about monsters and ghosts and magic and all kinds of fairytale, fantasy and horror-type subjects. Fourth. Well, need I go on?

This is, quite frankly, not my usual cup-of-tea. And yet when Pretty Monsters arrived unsolicited from Canongate I couldn’t help but be drawn to it. It’s an absolutely gorgeous-looking hardcover that has a real Gothic feel, owing to each page being edged in black. It features striking art-work by Australian-based illustrator Shaun Tan throughout (including the cover) and the weight of the book is perfect to hold in the hand, not too heavy and cumbersome as some hardcovers are wont to be.

There are nine stories here, some of which have been published elsewhere in the past, and each one presents an intoxicating, hugely original world. “These stories will come alive, put on suits and wrestle you to the ground,” says Alice Sebold on the back cover blurb. “They want you and you will be theirs.” She’s completely right. I’ve never read such a wacky collection of stories that gripped me, held me in their sway and slightly altered my perception of the universe when I came to each stunning conclusion. Where has Kelly Link been hiding all my life? She’s bloody brilliant.

She’s been described as “an alchemical mixture of Borges, Raymond Chandler and Buffy the Vampire Slayer“. But I wouldn’t be surprised to discover that she was the lovechild of Stephen King and JK Rowling. To give you an idea of the breadth of her style and imagination, here’s a brief rundown of each of the stories in this collection.

The Wrong Grave
A black comedy about a teenage boy whose girlfriend dies and is buried with his collection of self-penned poetry. When he suddenly wants his poetry back he accidentally digs up the wrong grave.

The Wizards of Perfil
A magical story about children who are sold to wizards, whom live in very tall towers and are never seen.

Magic for Beginners
A thrilling tale about a cult-TV show called The Library which a group of teenage school friends become slightly obsessed by. This particular story, probably my favourite in the whole collection, received the Nebula, Locus, and British Science Fiction Association Awards and was a finalist for the Grand Prix de l’Imaginaire, Hugo, Sturgeon, and World Fantasy Award.

The Specialist’s Hat
This is a classic ghost story set in a grand house with eight chimneys. Two ten-year-old twins, Claire and Samantha, are introduced to a magic hat by their babysitter. This one won the 1999 World Fantasy Award. You can read the whole story on Kelly Link’s official website.

Monster
A creepy story about a school camping trip that attracts an unexpected campfire guest — a foul-smelling monster.

The Surfer
A science-fiction story about a father and son travelling to Costa Rica to see a surfer who claims to have made contact with aliens. But their trip is waylaid when a flu pandemic hits and they are quarantined in an aircraft hangar.

The Constable of Abal
An almost old-fashioned fairytale about a mother and daughter, who turn out to be transsexual goddesses.

Pretty Monsters
This one involves schoolgirls, werewolves and romance.