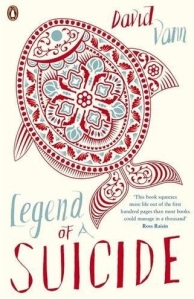 David Vann’s Legend of a Suicide is a deceptive book. I started it, thinking it was a novel, and was mid-way through it before I clocked that it was no such thing. This is actually a series of stories, albeit about the same character, Roy Venn, dealing with the suicide of his father, Jim.

The first, Ichthyology, is told through the eyes of a young Roy, who is obsessed with his aquarium and sneaks out of the house in his pajamas whenever he hears his parent’s fighting. We learn that his father, a dentist, is a troubled man beset by marital woes. The ending, when it comes, via a .44 Magnum handgun on the deck of a fishing boat, feels like a relief.

The next story, Rhoda, is a black comedy about Jim’s second wife, “who had dark, dark hair, pale skin, and a dropped eyelid that, on closer view, made her terribly beautiful”. At only 13 pages long, it’s enough for the reader to glean that Jim’s unable to relate to women very well: within days of their marriage the pair are rowing and Jim’s telling Roy, “She wasn’t like this before. This isn’t the woman I married.” We also discover Jim’s penchant for guns.

A Legend of Good Men is set after Jim’s death and focuses on Jim’s first wife (Roy’s mother) and the succession of men that she dates. Or, as Roy so aptly puts it:

The men she dated were a lot like the circuses that passed through our town. They’d move in quickly and unpack everything they owned, as if they had come to stay. They’d tempt us with brightly colored objects — flowers, balloons, remote controlled race cars — perform tricks with their beards and hands, call us funny names like snip, my little squash plant, ding-dong, and apple pie, and yell their stories at us day and night. Then they’d vanish, and we’d find no sign left, no mention  even, as if we’d simply imagined them.

By now, we’ve built up a pretty good picture of Jim, his first wife, his second wife and his son, and how his death has altered their lives forever. And then David Vann pulls a brilliant literary trick out of the magic hat and presents us with a two-part novella, Sukkwan Island, that is some of the finest story-telling you’re ever likely to come across in modern fiction. I loved this section of the book, which is told in the third-person (as opposed to the first-person in the preceding stories), and read it with a mixture of awe, fascination and fear.

Again, this story looks at Jim’s suicide from another angle: what if a bereaved son could extract his revenge on his dad before such a cowardly act is even carried out? I won’t spoil the plot, but if you think Stephen King meets Cormac McCarthy’s The Road you’ll get a fair idea of the horror and bleakness of what unfolds. Mind you, it’s quite hilarious in places, if you don’t mind laughing at gruesome things. Basically, Jim decides to spend a year living on a remote Alaskan island, taking his now 15-year-old son with him. He is woefully ill-equipped, both physically and mentally, for the task and when winter sets in things begin going a little awry, with devastating consequences…

The fifth and final story, Ketchikan, is told through Roy’s eyes as an adult revisiting the town his father once lived in, hoping to confront the mistress that destroyed his parent’s first marriage. But instead of putting ghosts to rest, Roy realises that perhaps there were very real reasons for what happened and that he’s failed to properly grasp them, let alone understand them. It feels like an emotional low-point, and the reader’s left wondering how much of the father’s patterns of behaviour will be carried on by the son.

Interestingly, David Vann has dedicated this book to his own father, James Edward Vann, who killed himself when David was a child. In his acknowledgments David thanks his family “because it was an uncomfortable topic I was writing about — my father’s suicide — and there’s exposure in these stories.” He adds: “They’re fictional but based on a lot that’s true.”

8 thoughts on “‘Legend of a Suicide’ by David Vann”