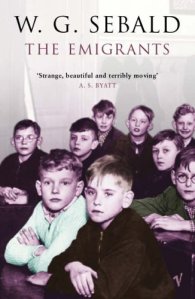 Winfried Georg (“Max”) Sebald is one of those writers I’ve been meaning to read for years, but it wasn’t until Robert McCrum, writing in The Guardian earlier this year, named him as one of three modern greats from the past 15 years, that I thought I really must get around to trying him. (Interestingly, The Guardian has an entire section devoted to Sebald on its website. His books The Rings of Saturn and Austerlitz were also named on The Guardian’s 1000 Novels Everyone Must Read list.)

The Emigrants, first published in 1992 and translated into English in 1996, heralded Sebald as a writer to watch. He apparently had a rather meteoric rise in the literary world, with all kinds of praise thrown his way, including a suggestion that he should win the Nobel Prize. But tragically all this came to nothing when Sebald was killed in a car accident in 2001, aged just 57.

Knowing of his tragic demise makes reading this book even more of a poignant experience, for The Emigrants is a melancholy book about grief and loss told from the perspective of four German Jews coming to terms with the events of the Second World War. It’s a strangely beguiling book, a weird mix of fiction, memoir and history. To complicate matters further, it lacks a plot, all the characters are told through the prism of other character’s memoirs, and the narrative meanders all over the place. The text is also littered with black and white photographs, none of which are captioned.

But despite these strange idiosyncrasies, the prose is eloquent and hypnotic, even if Sebald has a penchant for overly long sentences. And, somewhat surprisingly, it’s also highly readable and addictive. I ate this one up hungrily in the course of a weekend.

The book is divided into four parts, each one telling the story of a different exile: Dr Henry Selwyn; Paul Bereyter; Ambros Adelwarth; and Max Ferber. Their individual tales are linked by the unnamed narrator (believed to be a thinly veiled version of Sebald himself), who explores their histories and eventually comes to realise the devastating and occasionally long-lasting consequences of the Third Reich on their lives. Suicide, depression and displacement are never far away.

This is a sober and moving book about what it is like to have your country stolen from you. It was my first introduction to Sebald; I’m confident it won’t be my last.