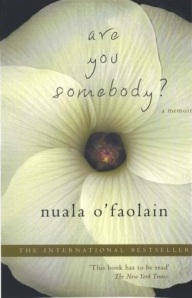 I’ve read some extraordinary memoirs in recent years, all by professional writers — Pete Hamill’s A Drinking Life, Hilary Mantel’s Giving Up the Ghost, Amélie Nothomb’s The Life of Hunger — and this one, by Irish author, journalist and TV producer Nuala O’Faolain, is right up there with the best of them.

O’Faolain, who died last year aged 68 from cancer, was a household name in Ireland. Indeed, in the introduction to this edition, she writes that she was “fairly well known” but is quick to point out that she was “no star”:

People have to look at me twice or three times to put a name on me. Sometimes when I’m drinking in a lounge bar, a group of women, say, across the room begin to look at me, and send one of their number over to me, or when I’m in the supermarket someone who has just passed me by turns back, and comes right up to me and scrutinises my face. ‘Are you somebody?’ they ask.

By contrast, I know very little about O’Faolain outside of her wonderful novel My Dream of You, which I read earlier in the year and had been told was a thinly veiled biography. Having enjoyed it so much I figured I should try the “real” thing, which is how I came to read this memoir.

She was born one of nine children in 1940 “when nine was not even thought of as a big family among the teeming, penniless, anonymous Irish of the day”. She viewed herself as a nobody, just an ordinary girl, in a country constricted by Catholicism, who would eventually be married and kept by a man. And yet, for most of Nuala’s life, she rages against this stereotypical expectation and breaks as many social norms as she can.

Without going into too much detail, she moves in with a man she has not married (a huge no-no in Holy Catholic Ireland at the time) and later flees to England, where she forges a hugely successful academic and journalistic career. But along the way, despite her successful working life, there is something missing: a troubled past and estranged relationship with her family seems to keep her back (her father, a well-known Irish journalist, does not come off very well in this memoir, nor her mother, who turned to drink to numb the pain of a bad marriage). And then there’s her promiscuity and search for “passion” which ultimately leaves her feeling rather lost and empty.

Surprisingly, for a woman so candid about her sexual desires, she gives scant regard to her partner of 15 years, the journalist Nell McCafferty and barely mentions her in this book, apart from describing the odd cosy holiday together. (Perhaps Nuala’s second volume, entitled Almost There, may fill in some of these gaps.)

Are You Somebody? is about one woman’s search for meaning, dealing with a past that you cannot leave behind and coming to terms with growing old. There’s a sadness at the heart of this memoir, and a slow-burning rage, too, and perhaps just a smidgen of self-pity. But, ultimately, it’s a powerhouse of a read, and you come away from it feeling as if you really got to know the lonely, flawed and hugely intelligent and brave woman who wrote it.

7 thoughts on “‘Are you Somebody?’ by Nuala O’Faolain”