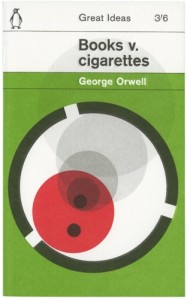 Books v. cigarettes is a small collection of essays by George Orwell brought together as part of Penguin’s Great Ideas Series 3. The title of the book comes from an essay of the same name in which Orwell considers how much money he spends on his two vices, reading and smoking. This particular essay, first published in the Tribune on 8 February, 1946, will resonate with book lovers the world over, because how many of us have foregone some other pleasure (or necessity) in favour of a good book?

To prove that reading is not an expensive hobby out of the reach of ordinary citizens, Orwell counts all the books he owns (this sounds remarkably like what I have done in recent weeks, tackling my TBR piles) and adds up their total price to work out how much money he has spent on reading over a 15-year period. He discovers he has some 900 books and that it has cost him a little over £11 per year.

He also includes his newspaper and periodicals intake, which is quite impressive: £8 per year on “two daily papers, one evening paper, two Sunday papers, one weekly review and one or two monthly magazines”.  (I suspect if Orwell was around today he’d be a complete internet junkie, reading all the news sites, book blogs, Twitter feeds and so on.) He also spends roughly £6 per year on library subscriptions and cheap paperbacks, chiefly Penguins, “which one buys and then loses or throws away”.

All up, he estimates reading costs him £25 per year, which, according to this calculator, is the equivalent of £648 in today’s money. By comparison, he spends £20 a year on cigarettes and beer.

In the grand scheme of things, he thinks this is quite reasonable although he points out that it is difficult to establish “any relationship between the price of books and the value one gets out of them”.

His second essay, Bookshop Memories, recalls his time spent working in a second-hand bookshop. His observations are both slightly snobby (“I doubt whether 10 per cent of our customers knew a good book from a bad one”) and acutely funny:

Many of the people who came to us were of the kind who would be a nuisance anywhere but have special opportunities in a bookshop. For example, the dear old lady who ‘wants a book for an invalid’ (a very common demand, that), and the other dear old lady who read such a nice book in 1897 and wonders whether you can find her a copy. Unfortunately she doesn’t remember the title or the author’s name or what the book was about, but she does remember that it had a red cover.

This quote made me laugh out loud, because I spent six years working in bookshops and used to get vague requests like this all the time!

Books v. cigarettes also includes a wonderful essay about reviewing books and another on the state of literature, which will appeal to bibliophiles. The rest of this slim volume tackles other non-bookish subjects: patriotism, the relationship between doctors and patients, and Orwell’s childhood memoirs spent at an exclusive boarding school for which he obtained a scholarship.

All up, this is a perfect, effortless read, highly personable and quite bookish, if you like that sort of thing.