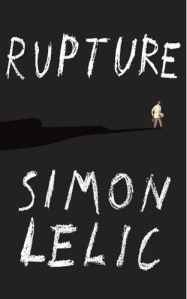 What drives a person to murder? That’s the central question underpinning Simon Lelic’s debut novel, Rupture, which looks at the aftermath of a horrendous crime in which a teacher shoots three students and a colleague at a north London school before turning the gun on himself.

Was mild-mannered Samuel Szajkowski (pronounced shy-kov-skee) a psychopath hellbent on killing the teenagers in his charge? Or did something “snap” and his temper get the better of him? Could his deadly actions have been prevented?

It’s down to Detective Inspector Lucia May to find out, although the school headmaster would very much like the case to be wrapped up quickly. Even Lucia’s bosses think it would just be easier to label Szajkowski a “monster” and be done with it:

‘Five people died. All right then. Where did they die?’ He [the chief inspector] looked at Lucia but did not wait for her to answer. ‘In the same room. And how? By the same gun, at the hands of the same gunman. You have a murder weapon, a motive, a room full of witnesses.’ DCI Cole looked at his watch. ‘I’ve got an hour before I’m due to go home. I could write your report and still knock off twenty minutes early.’

But Lucia doesn’t see it like that, particularly as her investigation begins to find evidence of systematic bullying in the school. The question is this: was Szajkowski bullied and if so, by whom? And if the headmaster knew this was going on, why didn’t he do something about it? Doesn’t that make him negligent in his duties?

This line of enquiry has an eerie resonance for Lucia herself, as it becomes apparent that she, too, is being bullied by her male colleagues.

Rupture is strikingly original fiction, and to pigeon-hole it as a crime novel would not be fair (although I suspect many will give it that label). At times it reminded me very much of Anita Shreve’s Testimony, which charts similar ground, albeit a sex scandal at a private school, in a similar way.

It’s also tempting to compare Rupture with other novels centred on “school shootings” but I think that does Lelic a disservice. That’s because this book tackles the subject from a fresh, new angle. For a start, it’s British (as opposed to American) and the perpetrator is not a student but a “misunderstood” teacher.

The structure, too, is unusual because Lucia’s criminal investigation is interleaved with the varied testimonies of those she interviews. Each of these testimonies is told in distinctive first person narratives, ranging from angry parents, obnoxious teachers and arrogant students. While this is a rather clever device allowing the reader to piece together what happened based on the information as it is revealed, some may find this structure too difficult to follow. I have to say I very much enjoyed it, because it places you directly in Lucia’s shoes and adds to the adrenalin rush as you get closer to finding out what really happened.

Despite the many and varied voices in this book, the characterisation is very strong, particularly Lucia, who is a likable, eager and tenacious investigator, dealing with a host of problems, both in and out of the office, but is slightly out of her depth. You really feel for her situation.

And some of Szajkowski’s colleagues, particularly the arrogant and super-confident physical education teacher, TJ, are wonderfully drawn. It’s only Szajkowski, dead and unable to speak for himself, who feels appropriately aloof and unknowable…

If you’re looking for a thrilling, provocative read, one that will linger in the mind and slightly alter your perspective on the world, then I can recommend Rupture. It’s an impressive debut, and one that marks Lelic as a new British author worth watching.

17 thoughts on “‘Rupture’ by Simon Lelic”