Today’s guest is Emma Young, who does publicity and online marketing for London-based indie publisher To Hell with Publishing. But she also has her own (very new) blog, Young, Literary London, which lists literary events coming up in London and documents events Emma’s attended.

We met very briefly at the David Vann reading last month, but I tend to follow Emma’s movements on Twitter, where she posts under the name @tohellwithemma

Emma lives in London’s East End (Whitechapel) but is originally from Bristol. She read English at university and spent two years studying texts from the late 14th Century up to the end of the 19th Century before finally hitting the 20th Century in her final year.  “These days, working in literary publishing, I spend a lot
of my time reading literary fiction that’s just been published or is about to be,” she says.

A favourite book: The Cuckoo Boy by Grant Gillespie

This is actually the first novel from our To Hell with First Novels imprint, so it holds huge sentimental value to me, but it’s also, genuinely, a wonderful book. It’s possibly cheating a little bit [to choose this one], but it really is the book I’m pressing on everyone, personally as well as professionally. It’s the story of a charming, captivating, adopted little boy, his imaginary friend, and the devastating consequences when they fall in with the wrong crowd. It’s beautifully written but also very funny: a really exciting, original debut.

Evie Wyld, author of After the Fire A Still Small Voice, has just given us a quote for it, so I’ll finish with her words rather than boasting about it myself: “A dark and elegant story of childhood, The Cuckoo Boy is horrifying and disarmingly funny. A book to keep you awake at night.” 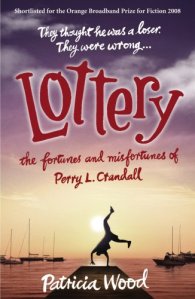 A book that changed my world: Lottery by Patricia Wood

Patricia Wood asks what happens when a sweet guy with an IQ of 76 wins the lottery. If you answered a) someone writes a twee account of simple people + lots of dosh x overcomes twist = deserved happiness, you failed. The set up is commercial but Lottery is so much more than a pretty face…

Perry, our hero, is a character you don’t mind loving, not because he’s an idiot savant but because he’s not. And while there are the predictable perils such as Perry’s evil money-grabbing family, there are many more unexpected ones. It’s well written – funny and dark, with smart prose juxtaposed with Perry’s thoughts, largely: ‘that is so cool’, which you’ll want to say for ever. It’s thoughtful, clever, it’ll change the way you’ll think about money, people, relationships, and what a novel can be.

A book that deserves a wider audience: Direct Red by Gabriel Weston

This no-holes-barred story of a young surgeon’s daily, um, grind, deserves to be read by everybody, squeamish and not squeamish. It’s as simple as that. Although there’s a section in a mortuary when the junior doctors have to get creative with a saw that still scares me more than pigeons and spiders. Which is a huge amount. I don’t think the work of a surgeon has ever been so honestly recounted and the stories are, of course, unbearable to read and yet obscenely compelling. But what really makes this book special is the writing, which is as original and stylish as anything I’ve read. Not bad for a first novel.

Direct Red got great reviews when it came out but was, I think, overlooked for prizes, perhaps because it’s fiction that reads like non-fiction, and didn’t attain that most-talked-about status it should have. I forced it on my medical student sister (who didn’t change career paths) and would love to force it on you, too.

Thanks, Emma, for taking part in my Triple Choice Tuesday!

I’ll admit that I’ve had Direct Red on my wishlist for awhile, and this has only made me want to read it even more.

What do you think of Emma’s choices? Have you read any of these books?