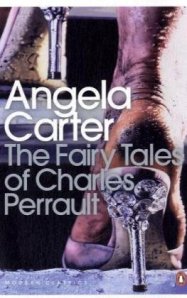 I’ve spent much of my adult life convinced that I had grown out of fairy tales. But then, last year, I read Kelly Link’s Pretty Monsters, a wonderful collection of modern and slightly twisted fairy tales for young adults, followed not long later by Shirley Jackson’s We Have Always Lived in the Castle, and I had to reassess my opinion. I found both books enormously enjoyable.

By sheer co-incidence this year I’ve read several novels that have been heavily influenced by the fairy tale tradition: Philippe Claudel’s Brodeck’s Report, Ali Shaw’s The Girl With Glass Feet and Jennifer Johnston’s The Illusionist (a reworking of Bluebeard).

And then, last week, partly inspired by the lovely cover of the Penguin Modern Classics edition and Paperback Reader’s Angela Carter month, I picked up The Fairy Tales of Charles Perrault in Foyles. At just 79 pages in length I couldn’t really go wrong, could I?

Carter, who died from cancer aged 51 in 1992, was a fairy-tale writer (among other specialisms). This slim volume features 10 of Charles Perrault’s fairy tales, translated from French (in 1977), to which Carter has added her own distinct twists and tongue-in-cheek morals.

The introduction by Jack Zipes, a professor of German at the University of Minnesota (and worth the cover price alone), and Carter’s own Afterword explains the fairy tale tradition and Perrault’s role in it. Perrault, a 17th century French writer who died in 1703, wrote some of the most well-known fairy tales, including Little Red Riding Hood and Cinderella, which were based on oral folklore.

Zipes argues that Perrault was fairly progressive in his thinking and that much of his work, including his poetry, “stressed the necessity of assuming an enlightened moral attitude towards women and exercising just authority”. He adds that all his fairy tales

feature women, in particular, the comportment of women in desperate situations, and how their qualities enable them to triumph and find their proper place in society under masculine domination.

Given that Carter was a feminist, it’s probably no surprise that she was drawn to these works, although she appears to take a broader view, describing Perrault’s fairy tales as “little parables of experience from which children can learn the way of the world and how to come to no harm in it”.

The collection features Little Red Riding Hood, Bluebeard, Puss in Boots, The Sleeping Beauty in the Wood, The Fairies, Cinderella, Ricky with the Tuft, Hop o’ my Thumb [Tom Thumb], The Foolish Wishes, and Donkey Skin. The last two were originally tales told in verse but Carter has translated them into prose. Each comes with a moral at the end, and it it these which I found most enjoyable, particularly as Carter likes to interpret them using her rather wicked feminist eye. For instance, here’s what Carter says about Little Red Riding Hood:

Children, especially pretty, nicely brought-up young ladies, ought never to talk to strangers; if they are foolish enough to do so, they should not be surprised if some greedy wolf consumes them, elegant red riding hoods and all. Now, there are real wolves, with hairy pelts and enormous teeth; but also wolves who seem perfectly charming, sweet natured and obliging, who pursue young girls in the street and pay them the most flattering attentions.
Unfortunately, these smooth-tongued, smooth-pelted wolves are the most dangerous beasts of all.

Dare I say that never a truer word were spoken!

This is a lovely collection, and one that has definitely made me think twice about all those seemingly innocent fairy tales I read as a child. There are some deep, dark messages going on here. But, in Carter’s hands, there’s plenty of fun, too.