Today’s guest is Sue, from Whispering Gums, who lives in Canberra, the capital city of Australia. Sue trained as a librarian but has spent almost all of her career working in film and sound libraries and archives.

She joined an online book group in January 1997, so has been discussing books online for a long time, but only started blogging last year. And what a blog it is. I love Sue’s penchant for Australian literature, with diversions into trees (hence the name), music and other cultural experiences. I’ve only been visiting for a short while, but Whispering Gums has promptly become one of my favourite book blogs.

Pick an Austen, any Austen. As a long-time Austen fan, I find it hard to name a favourite. In fact, like many Austen fans, I usually say my favourite is the last one I’ve (re)read, BUT if I had to name one it would probably be Persuasion.

Anne Elliot is not as sparkly and witty as Pride and Prejudice’s Elizabeth Bennet, and the novel is not as “perfect” as Emma, but I have always admired Anne for her thoroughly good values. Despite being surrounded by selfishness and vanity, she holds her ground steadily, living her life quietly but usefully, until she finally wins through. She may look to some like a pushover, but her options in that place and time were limited, and she does show strength when the opportunity arises. It is she who says: “Men have had every advantage of us in telling their own story. Education has been theirs in so much higher a degree; the pen has been in their hands.”

Anyone who thinks Jane Austen writes silly romances with nothing deeper to ponder than how to get a man has not really read her! 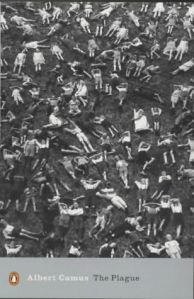 A book that changed my world: The Plague by Albert Camus

I’m not sure that any book has changed my world, but there are many that contain ideas that I often return to. The Plague, which I first read in my idealistic youth, is one such book.

I’m not one of those people who can spout quotes from books at will, but there are a few that have stuck, and one of these comes from The Plague. The character Tarrou says: “Everything is more or less sick of the plague. All I maintain is that on this earth there are pestilences and victims, and it’s up to us, so far as possible, not to join forces with the pestilences.”

Some people read this as saying we should become “victims” instead, but for me the focus of the message is that we should not harm others, that it is a tough world and that our best path through it is not to make it tougher. It’s a simple message really, but sometimes simple is best, particularly when it is framed by an engaging story. 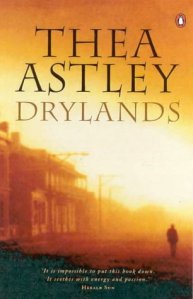 A book that deserves a wider audience: Drylands by Thea Astley

I cannot do this exercise without including an Australian book – but which one, as there far too many Australian writers who do not get enough exposure internationally? Perhaps the most worthy is Thea Astley: she has been way under-appreciated despite her significant achievements which include being, until Tim Winton’s win last year, the only writer to have won the Miles Franklin Prize four times. By any reckoning that should make her at least as well known as Winton, but she’s not.

She was prolific, so I’ll choose her last, Drylands, which is subtitled “a book for the world’s last reader” and which has an interesting structure as it looks more like a set of short stories than a novel.

Astley is earthy and honest, and her writing is not always easy. She cared deeply about humanity and the failures of our social conscience, and this book explores many of the topics she railed against throughout her life, including the poor treatment of women and indigenous people.

It’s not a cheery book – its title can be read literally and metaphorically. But, don’t you think that this description of the main character – “… she had never been harried by the glamour of any possessions but books” – would make a very fine epitaph?

Thanks, Sue, for taking part in my Triple Choice Tuesday!

I’ve had Astley’s book in my TBR for about two years: I found a very cheap copy in a charity shop and snapped it up while I had the chance, so now I’m itching to read it. Ditto for The Plague. And now I’m beginning to wonder whether it’s time to try some Austen, too…

What do you think of Sue’s choices? Have you read any of these books?