Today’s guest is Maxine Clarke from Petrona, a blog that focuses mainly on crime fiction, with “occasional forays into books in other areas, publishing, science, the web and more”.

I’ve been following Maxine’s blog for four or five years now. In fact,
several years ago we met up and had a meal and glass or two of wine together. These days we tend to keep in contact via our blogs and email.

Maxine is an editor at Nature, so we share an interest in journalism and publishing, but we also have a mutual appreciation of crime fiction. Indeed, I largely hold Maxine responsible for my discovery of Scandinavian crime, specifically Arnaldur Indriðason, and whenever I’m in need of some inspiration, in terms of new titles and new authors to try, Petrona is the first blog to which I turn. 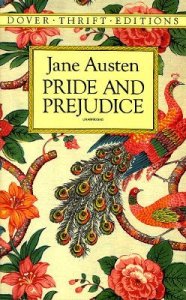 A favourite book: Pride and Prejudice by Jane Austen

Like many people, Jane Austen is a favourite author of mine. I was lucky enough not to be assigned any of her novels to read while I was at school, as at that time I would not have appreciated the subtle, domestic plots – I was more of a Dickens and Arnold Bennett fan in those days.

I first read Austen when I was in my late teens/early twenties and instantly loved her. I enjoyed Emma, in particular, so much that I immediately bought a book of literary criticism of that novel and ploughed through that.

Since then, I have re-read Austen’s novels several times, perhaps once every 10 years or so. I have also seen numerous film adaptations, some of which I have enjoyed very much.

Which is my favourite Jane Austen novel? Well, it changes – I think at the moment it is Pride and Prejudice, but when I next re-read one of her books it will probably be that title! I have to admit that I really like her romantic heroes, though I have never actually met anyone like one of them. 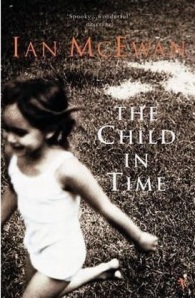 A book that changed my world: The Child in Time by Ian McEwan

I had discovered Ian McEwan a few years before this book was published, via his short stories, which at the time stood out for being on topics that aren’t (or weren’t, then) usually addressed in “literature” but were superbly written, hence standing head and shoulders above everything else of that ilk.

McEwan’s first novel, The Cement Garden, was on similar themes to his short stories. When The Child in Time was published in 1987, I was living in Camden (north London) and remember going into the bookshop by the tube station and buying the hardback – something I practically never did (and still practically never do!)

The book turned out to be a mature work, with a shocking beginning in which a father loses his young child while out shopping. The book is not only about how this incident affects the man’s subsequent life, but is also about science. McEwan (as has been amply shown in his subsequent creative output) is not only fascinated by science but also seeks to engage with it in a way that, in my experience, is very rare. He does not do what many attempt to do, and explain a concept, nor does he take a pretentious and condescending approach as I’ve seen other authors do who weave science into their novels. Here, McEwan is interested in time from many perspectives (including, but not only, scientific ones) and these perspectives form part of this excellent novel.

This novel marked a turning-point for the author: I have read all his subsequent books (some of which I have enjoyed more than others, but they are all beautifully written and observed), and if I had to say who is my favourite living novelist, Ian McEwan would be my choice.

When I read The Child in Time, I had no children, so had to imagine what the central character was feeling on the basis of no experience. I made a resolution to myself that I would re-read the book one day after I had had children (if I ever did). I will certainly keep that resolution.

A book that deserves a wider audience: Miss Smilla’s Feeling for Snow by Peter Hoeg

These days I read mostly crime fiction for reasons I won’t dwell on here. Back in the early 1990s, I read much more widely – including many highbrow novels, classic and modern, which have long since faded from memory. One novel, however, sticks in my mind from that time, and I still have it, waiting to be re-read one day. The book is Miss Smilla’s Feeling for Snow by Peter Hoeg.

This novel is widely held to be the “parent” of the current popularity of translated crime fiction. One can certainly thank Christopher MacLehose for publishing the first English-language translation, beautifully done from the Danish by Felicity David (Tiina Nunnally).

I loved the novel as soon as I started reading it, because of the heady mix of a compelling mystery that grabs you from the first page; and a mesmerising central character, Miss Smilla, who as a Greenlander is a fish out of water in metropolitan Copenhagen. She’s a fantastic and fascinating character, stubbornly encountering trouble and conflict in all aspects of her life – her relationship with her father is memorable.

The book is simply marvellous and original – for about the first three-quarters. Unfortunately, it totally falls to pieces at the end with a pseudo-science, hokum-ridden, ‘thriller’ finale. Nevertheless, the first (main) part is just so good that I’d recommend the novel to anyone — especially if you have become interested in translated crime-fiction as a result of the current vogue for Stieg Larsson and Henning Mankell (both authors also discovered for an English-reading audience by the same publisher, Christopher MacLehose).

I have not seen the film based on Miss Smilla’s Feeling for Snow (which apparently wasn’t very good, called Smilla’s Sense of Snow, completely missing the haunting charm of the UK book title), nor have I enjoyed the author’s subsequent books. His second novel I read but thought quite weak, and I gave up on the one after that. Miss Smilla’s Feeling for Snow, first published in the UK in 1993, is an original, compelling and absorbing novel.

Thanks, Maxine, for taking part in my Triple Choice Tuesday!

As I’ve recently admitted, I’ve not read any Austen. I’m not sure I can put it off any longer! I have, however, read a few McEwan novels, but not The Child in Time, and I’ve had Miss Smilla’s Feeling for Snow in my TBR for about 10 years. I’ve always put off reading it because I saw the film, which starts off well and then turns into some kind of preposterous, over-the-top thriller, and I figured the book might be more of the same…

What do you think of Maxine’s choices? Have you read any of these books?