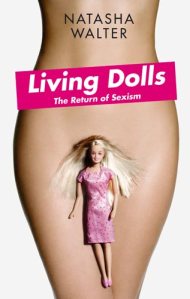 Every time I logged onto the office intranet this week I was greeted by the sight of Lucy Pinder’s breasts popping out of a very tiny bikini top. Lucy, an English “glamour model”, recently graced the cover of one of the lads magazines published by the company for which I work. This particular cover won an in-house prize (“cover of the month”), which meant Lucy’s “assets” got further publicity via our intranet homepage.

Now, I think I’m fairly unshockable and remarkably tolerant, but I was upset at seeing this woman’s hugely over-sized bust on my computer screen every day. It wasn’t the nudity that made me uncomfortable, it was the objectification of a young woman that offended me. That this happened in my work place, where I’m surrounded largely by men, made me angry, not least because I have a relatively senior position in the company and the last thing I expect to see as I go about my professional business is a scantily clad woman in a provocative pose.

And yet, if I was to complain about this, I’m pretty sure it would not be taken seriously. After all Lucy Pinder’s entitled to get her tits out, isn’t she? And surely it’s empowering, and liberating, for her, as a woman, to have the freedom to do so? She gets paid big bucks after all.

This is just one example of why I think Natasha Walter’s Living Dolls is a hugely important and timely book. I read it a few months ago now, but I’ve been thinking about it ever since.

Walter’s argument is that we’ve all been conned into thinking that today’s woman has achieved economic and sexual equality. She claims that in 21st Century Britain we are experiencing a new wave of sexism, where a woman’s passport to success is not her brains, but her looks and, more importantly, her sexual allure.

She divides her book into two parts. The first looks at this “new sexism” in which girls are becoming sexualised at a younger and younger age (Walter dubs this “hypersexualisation”). She visits a nightclub where she witnesses a “Babes on the bed competition”; talks to pole dancers and prostitutes; and interviews teenage girls about their sex lives. From this she is able to argue that the growing commercialisation of sex has provided women with new opportunities to make money, but by the same token those that go down that route often do it, not because it empowers them or liberates them, but because they have no other alternative.

The second part of her book examines the reasons why this new sexism has occurred. Walter shows that we are increasingly being encouraged to believe that the inequality between men and women is not social but biological, that girls will always prefer pink to blue, and that they like playing with dolls rather than toy cars. She provides a critique of scientific studies that perpetuate the myth that there are innate biological differences between the sexes. These studies are disseminated by a relatively uncritical and lazy media that accepts the results at face value. (This study from last month is but one example.)

What I found particularly alarming was how quickly these studies begin to be accepted as part and parcel of every day life, so that if a woman, or indeed a young girl, bucks the trend she is made to feel as if there is something wrong with her. Walter’s argument is that biological determinism not only stifles and limits women’s choices, it also impacts on men’s choices too.

Living Dolls is a powerful book, one that is thought-provoking and incredibly easy to read. If there is any flaw it is that Walter’s hypothesis in the first part is based on a mere handful of interviews with young women, so her sample is not statistically significant. Nevertheless she raises important issues, the most troubling of which are her observations about the ways in which young girls are being raised in modern day Britain. When women are expected to look a certain way, think a certain way and conform to outmoded stereotypes is it any wonder Walter believes we’re raising a generation of living dolls “aiming for airbrushed perfection”?

16 thoughts on “‘Living Dolls: The Return of Sexism’ by Natasha Walter”