Today’s guest is Tony from Tony’s Book World whom I first “met” via the many comments he used to leave on this blog. At the time Tony did not have a blog of his own and yet he seemed incredibly knowledgeable about very many authors and had read some of my favourites, including Jennifer Johnston.

So I was delighted when Tony finally started blogging last September, if only so I could find out a bit more about him and his love of books!

Tony is a computer programmer from the northwest suburbs of Minneapolis although he actually describes himself as “a farm boy from western Wisconsin who inexplicably became interested in fiction”.

“But before you write me off as just a country bumpkin,” he tells me, “I want you to know that my wife Deborah graduated from Harvard and is a Doctor of Philosophy. Of course, that doesn’t say anything about me beyond my good taste in women.” 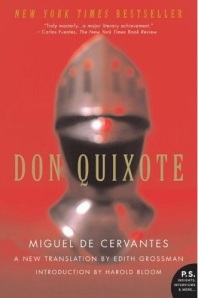 Don Quixote is a knight who is lucky to have a servant and friend like Sancho Panza, who always puts the best light on even Don Quixote’s most ridiculous pretensions. He also covers for Don Quixote, no matter how badly Quixote screws up in his knightly duties and his romance with the beautiful Dulcinea.

I was immediately put in a good mood by the exploits of Don Quixote and Sancho Panza, but I didn’t think there was any way this kind of humour could stand up for 900-plus pages. But as soon as I finished Book One of Don Quixote, I had to read Book Two.

The entire novel is a complete delight, surely one of the most charming, good-spirited books ever written. The translation I read was the new translation by Edith Grossman.

A book that changed my world: Who’s Who in Twentieth Century Literature by Martin Seymour-Smith

Martin Seymour-Smith was an English poet and critic. This book covers nearly everyone who has written literature in the Twentieth Century up to 1976, when it was published. In a few straightforward paragraphs for each writer, Seymour-Smith describes the body of work each author has published and his opinions on that work.

Soon after purchasing the book, I discovered that if Martin Seymour-Smith liked a book, I would probably like the book. Who’s Who in Twentieth Century Literature quickly became my guide.

A few of the many writers I discovered through this book are Rosamund Lehmann, Stig Dagermann, Karin Boye, Henry Handel Richardson and Robert Musil.

Somehow in the bedlam and confusion of the early Eighties, I lost this book. Since I was still very interested in literature, I missed having my trusty guide. Then, in 1986, I found a hardcover version of the book in a used bookstore in Philadelphia, which I was able to purchase for a few dollars. I still consult Who’s Who in Twentieth Century Literature frequently. Also, I try to bring to my own writing the same qualities as Martin Seymour-Smith. Some day I want to get around to reading Seymour-Smith’s poetry.

A book that deserves a wider audience: Antonya saw the Oryx First by Maria Thomas

Although she was born in the United States in 1941, Maria Thomas spent most of her adult life in east Africa after going there as a Peace Corps volunteer. In the novel Antonya, an American doctor running a dilapidated field hospital, develops a strong emotional bond with Esther Moro, a village girl who is disfigured, first by a female circumcision ceremony and then by a drunken sailor with a broken bottle. Esther is inspired to become a doctor herself, adopting a mystical form of faith healing which causes Antonia to question her own competence. Antonya knows that now that colonialism has ended, she will have to leave Africa even though she has been there most of her life.

This novel is a strange and insightful look into the wreck of Africa that was left by the colonialists.
Maria Thomas was killed at age 48 in a plane accident in Ethiopia in 1989. This novel was re-published in a paperback edition on its twentieth anniversary. She is also remembered through the Maria Thomas Fiction Award, which is presented each year to recognise, encourage and promote Peace Corps writers.

Thanks, Tony, for taking part in my Triple Choice Tuesday!

What do you think of Tony’s choices? Have you read any of these books?