For this list of 10 Books I’m looking at those that tickle the funny bone. Admittedly, I generally prefer my fiction a little on the darker side, but every now and then it’s refreshing to read something a bit more light-hearted, and if it gives me a belly laugh or two, then all the better.

Plus, readers constantly ask me to recommend books that will make them laugh — and these are the humorous novels that immediately spring to mind.

This isn’t your typical funny novel. In fact, it’s probably best classed as historical fiction. But there are aspects of it that are incredibly witty. Told through the eyes of more than 20 diverse characters, it plunges the reader into a wonderful boys’ own adventure tale turned comical farce in which a Manx smuggling vessel inadvertently flees British Customs by sailing half way around the world to Australia. To make the journey legitimate the crew, headed by Captain Illiam Quillian Kewley, carry on board a small expedition team, comprising a spiritually crazed reverend, a sinister racial-theorist doctor and a wayward botanist, intent on finding the lost Garden of Eden in Tasmania. It’s a wonderful romp and, in my opinion, is one of the best books published in the past 10 years. 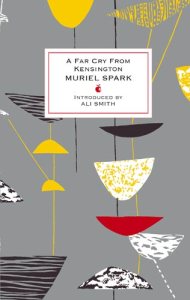 ‘A Far Cry from Kensington’ by Muriel Spark

I suspect I could have chosen any of the late Muriel Spark’s novels to be included in this list, but I’ve gone for this one purely because I remember enjoying it so much when I read it last year. It’s set in 1954 and tells the story of Mrs Hawkins, who works in publishing, and finds herself in deep water when she’s just a little too frank with a client. There’s a dual narrative involving a death threat against a lodger with whom Mrs Hawkins resides, which adds a rather sinister twist to the story.

‘The Ginger Man’ by J.P. Donleavy

Ask me to name the funniest story I’d ever read and I would not hesitate to name this one. First published in Paris in 1955, the book was banned in Ireland — where it is set — and the USA for obscenity. It follows the adventures of Sebastian Dangerfield, an American Protestant of Irish descent, who does everything a married man should not do: he spends the couple’s rent money on alcohol; staggers home drunk and acts violently towards his wife; and conducts numerous adulterous affairs. He’s thoroughly unlikable and completely selfish, and everything he does is outrageous. And while the book treads a whisper-thin line between comedy and tragedy, it’s the comic elements which really makes this story a great one to chortle along with. 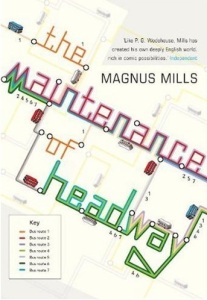 ‘Maintenance of Headway’ by Magnus Mills

Magnus Mills is one of my all-time favourite authors, but he is an acquired taste. I’ve read his entire back catalogue and enjoyed them all. This is his latest book, but I could have easily named one of his others, as they’re all hugely funny stories. Maintenance of Headway is pretty much devoid of plot; it’s basically a series of vignettes about the running of the London bus network. Much of it is laugh-out-loud funny, particularly if you have a dry sense of humour. The wit comes chiefly through the conversations held between drivers on their tea-breaks. It’s the perfect read if you are looking for something that little bit different… 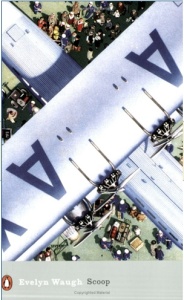 First published in 1938, Scoop is billed as one of the funniest novel ever written about journalism. It follows the escapades of William Boot, who is mistaken for an eminent writer, and is sent off to the African Republic of Ishmaelia to report on a little known war for the Daily Beast. With no journalistic training and far out of his depth, Boot struggles to comprehend what it is he is being paid to do and makes one blunder after another all in the pursuit of hot news. One word: hilarious.

‘A Short Gentleman’ by Jon Canter

This novel pokes fun at the British upper classes. The story is narrated by Robert Purcell, a distinguished barrister who finds himself on the wrong side of the law. The book is essentially a confession of his downfall told in a very long-winded but brilliantly witty way. We don’t know what crime it is that Robert committed, and part of the joy of reading this book is trying to figure it out as you go along.

A novel about the pornographic industry might not sound like a barrel of laughs, but in the very capable hands of Chuck Palahniuk it takes on a rather surreal, laugh-out-loud dimension. Instead of glorifying pornography, he pokes fun at it, and, in doing so, he highlights the absurdity, warped mentality and crudity of it all. But if I can offer a caveat, it would be this: don’t bother reading if you are easily offended. There’s plenty of bad language and crude scenes to last a life time in this one!

‘Something Fresh’ by P.G. Wodehouse

I couldn’t put together a list of funny novels without including some Wodehouse. In this book, the first in the Blandings series, a retired American millionaire, Mr Peters, tries to get back his incredibly rare and valuable scarab which has been absent-mindedly pocketed by Lord Emsworth. What follows is a complete farce in which two rivals — Ashe Marson, a poorly paid writer of detective stories, and Joan Valentine, a magazine correspondent — try to get the scarab back in exchange for a rather generous reward from Mr Peters. Throw in an overweight private detective, a rich “idiot child”, a fussy butler and an efficient private secretary, among others, and the comic world of P.G. Wodehouse comes truly alive. 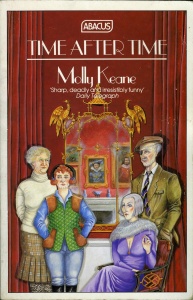 ‘Time After Time’ by Molly Keane

This is a delicious black comedy that seems frothy and lighthearted on the surface, but has a very dark heart beating at its centre. It’s not immediately obvious but this is a story about the nasty things people do to each other. It’s set in a beautiful but crumbling mansion in Southern Ireland where four elderly siblings reside. Each of them is eccentric, fiercely independent and set in their own ways. When their cousin Leda arrives unannounced for a short stay little do they know the ructions she is about to cause… More please. 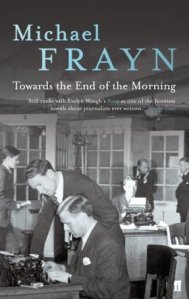 ‘Towards the End of the Morning’ by Michael Frayn

Novels about journalism and newspapers are particular favourites of mine (see Scoop above), and this one, written in 1967, harks back to the days when Fleet Street began to experience terminal decline. While it’s set in an unspecified newspaper and focuses on print journalists fearing for their futures, it’s essentially a comedy of manners. I laughed out loud a lot while reading this one.

So, what did you think of my choices? Are there any particular books or authors you’d recommend as a funny read? What is missing from my list?