Today’s guest is the First Lady of book blogging, Lynne of Dovegreyreader Scribbles.

I’m sure everyone is familiar with the “Devonshire-based bookaholic, sock-knitting quilter who is a community nurse in her spare time”, so I’m delighted Lynne took time out of her busy schedule to compile her Triple Choice Tuesday selections, which are as follows: 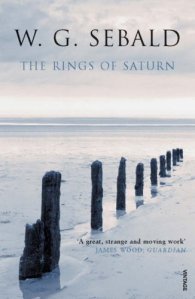 A favourite book: anything by W.G. Sebald

Well, I’ve strolled around my shelves and decided that a favourite book this week (but which might be usurped next week) is anything by W.G. Sebald.

I think he might be an acquired taste and it took me some time to acquire it but I persevered. One day I picked up Rings of Saturn and I ‘got’ it and Max Sebald has enthralled me ever since. He has this oh-so clever way with pictures embedded into the narrative, which beguile and confuse.

Sebald once said “by all means be experimental but let the reader be part of the experiment” and I now love to pick up any his books and see where they may take me: Austerlitz and the continuous narrative that won’t let you get off; The Emigrants and that final turning of the page after the description, followed by the absence of a photograph at the precise moment when you most want one, so that you close the book feeling ultimately frustrated but with a deep understanding of just what the emigrants had lost, their identity, their home, their past. In fact, writing this reminds me I am due a revisit

A book that changed my world: A Testament of Youth by Vera Brittain

This is a book that gave me a perspective on the First World War that has influenced my understanding and my reading of it ever since. I doubt I’ll ever forget that moment when I first read of the death of Vera’s fiancé Roland, due home for Christmas leave…she dashes to the phone expecting to hear his voice, instead to hear that he has died of his wounds. Somehow that moment is seared on my memory and comes to mind whenever I read anything about the Great War now.

A book that deserves a wider audience: Owls Do Cry by Janet Frame

I’m sure Janet Frame’s audience is very wide beyond the shores of New Zealand, but I can’t pass up the chance to widen it a little more, and I have Stella Duffy to thank for insisting that I discovered Janet Frame, which I did with Owls Do Cry and that was me done for.

The story of Janet Frame’s psychiatric misdiagnosis and subsequent eight-year confinement in a mental hospital, with salvation from lobotomy by the fortuitous winning of a prize for her short story collection The Lagoon, may all be well known and perhaps in many respects labels her, but I discover a multi-faceted author whenever I read Janet Frame.

Living in the Maniototo was a fine example of all her skills, that alchemy with words … “a sentence which keeps its feet clean is good…a word which is exciting to look at and say which doesn’t slop its meaning over the side is good, a word which comes up sparkling from the well is good” and with it comes her seamless journeying between fiction and non-fiction, all destined to keep a reader on their toes. It’s like looking into an endless series of mirrors and never quite being sure what you are seeing.

A volume of Janet Frame’s short stories The Daylight and the Dust has been published by Virago this month and I have been in contact with Janet’s niece, who is writing a piece for dovegreyreader on the Janet she knew, which I am very excited about. Yes, everyone please, please go read Janet Frame.

Thanks, Lynne, for taking part in my Triple Choice Tuesday!

I read and reviewed Sebald’s The Emigrants last year and found it a challenging, thought-provoking and rewarding read. I keep meaning to read more of his stuff. The Vera Brittain book sounds fascinating (and one my father, a Great War buff, would particular enjoy — are you reading this, Harry?) Shamefully, I’ve never read Janet Frame, although I did very much enjoy her biopic, starring Kerry Fox, when it was screened on Australian TV in the early 1990s.

What do you think of Lynne’s choices? Have you read any of these books?