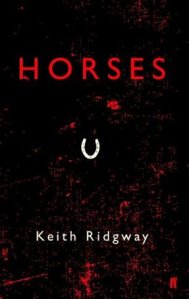 Keith Ridgway’s Horses was first published in 1997 as part of a Faber and Faber anthology of new writers, but  was then reissued as a standalone novella in 2003. At just 83 pages it makes for a relatively short but undeniably powerful and atmospheric read.

I first heard about the book via John Self, who reviewed it earlier this year. John drew comparisons with John McGahern, my favourite writer, because of the book’s “rural setting, the close-knit community, the febrile relationships, the broodings – resentment, regret, revenge – at the heart of many motivations”. But John also said that “the violence and bloodletting which seeps through it would never have suited McGahern’s low-key style”.

I have to agree. The prose is reminiscent of McGahern, with its gentle rhythms and musicality, and even the characters, particularly the trinity of policeman, doctor and priest, could easily have fallen out of one of his novels. But there’s an edginess, and a black sense of humour, in Ridgway’s work that marks him out as his own man.

The story is set on one particularly wild and stormy night in an unnamed village south of Dublin. An arsonist has burnt down the local cinema, Gill’s butchers and Dr Brooks’s stables. Three horses, of the title, have died and their owner, a teenage girl called Helen, is distraught. Who is to blame?

Father Savoy, relatively new to the parish, has already heard “the small whispers that were doing the rounds, as always in situations like this, blaming the strangest member of the community for the community’s misfortunes”. That stranger is Matthew Doyle, a homeless man with no shoes, who talks to walls but has a sharp mind (“It may be said of this town, Fr Devoy,” Grealy the shopkeeper had told him, “as of no other town in Ireland, that our village idiot is a genius.”)

When Matthew tells Fr Savoy that he saw who did it, the priest is convinced it’s merely a figment of Matthew’s childlike imagination. But just to be on the safe side, he visits Dr Brook to warn him about Matthew’s confession. A short time later the local policeman, Garda Cullen, finds Matthew lying on the road, blood pouring from a head wound and a long crow bar near by…

This perfectly paced story, with all its twists and turns, is a joy to read. A dark, complex and occasionally witty tale about grief and revenge, Horses is also about small communities and the secrets they keep. And it marks Ridgway, a Dublin-born writer with three novels to his name — The Long Falling (1998), The Parts (2003) and Animal (2006) — as someone I really must investigate further.

9 thoughts on “‘Horses’ by Keith Ridgway”