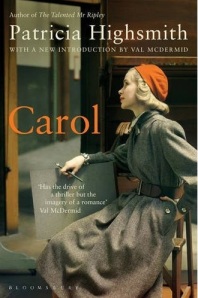 Most of us know the late Patricia Highsmith as a writer of psychological thrillers, such as Strangers on a Train and The Talented Mr Ripley. But the second novel that Ms Highsmith wrote was a romance.

Sadly, because it focused on a lesbian relationship, her then publisher, Harper, did not want it, but it was picked up by a smaller press and published in 1952 under the pseudonym Claire Morgan. Titled The Price of Salt (later to be changed to Carol on subsequent reprintings), it became hugely popular for a short period of time (it sold nearly 1 million paperback copies in 1953), and then fell out of print. It was reprinted again in 1991 by Naiad Press, and just this year, with a very nice introduction by Val McDermid, by Bloomsbury. I picked it up by chance while book browsing in The Riverside Bookshop, attracted by the gorgeous cover design with its striking use of bold orange.

The story is set in Manhattan in the early 1950s, a locale and time period that I find particularly attractive and interesting. The Second World War is still very much a recent memory, and all the mod-cons we take for granted today simply do not exist. The characters that populate this novel work long hours, they smoke, they drink beer (even the women), they dine out in cheap restaurants, buy meals to make at home from street corner delicatessens, worry about paying the rent and alleviate boredom by going to movie theatres, musical performances, hockey games or take long strolls through the park.

The central figure in the novel is Therese, a 19-year-old “orphan”, who has taken a Christmas sales job working on the doll counter of Frankenberg’s department store. The job is just a temporary arrangement in order to pay the bills while she looks for something in her real line of work, which is a stage designer.

One day she serves an attractive woman in her early 30s, and finds herself completely smitten by her.

She was tall and fair, her long figure graceful in the loose fur coat that she held open with a hand on her waist. Her eyes were grey, colourless, yet dominant as light or fire, and, caught by these, Therese could not look away.

Under normal circumstances you would expect Therese, who already has a steady boyfriend — the ever-dependable if somewhat dull Richard — to forget this customer. But Therese is determined to befriend her and armed with her address (garnered by arranging to have her purchases home delivered), she sends her a Christmas card. What follows is a burgeoning friendship in which Therese slowly manages to ingratiate herself into Carol’s life.

And while Therese is clearly obsessed by Carol, the feelings are not reciprocated because Carol is too caught up in her own problems: a bitter divorce and a potential custody battle over her young daughter. But the dynamic between them soon changes when the pair disappear on a road trip across the United States…

For a novel that is billed as a “lesbian romance” there isn’t really much romance in this book. Nor is there any sex. This is more a novel about a young woman’s coming of age, of her finding her place in the world and of broadening her horizons beyond her closeted life in Manhattan. On another level it also focuses on the power plays between people — who has more to lose, who has more to gain — and of the ways in which our “lifestyle choices”, particularly in 1950s America, determine our fate.

It’s an incredibly atmospheric story, because Highsmith is able to build a sense of impending doom and menace without really spelling anything out. There’s not much detail here, though, and there are frustrating moments when you realise you have to do a lot of reading “between the lines” to understand what is fully going on. I found Therese particularly annoying at times, but perhaps that’s because Highsmith has painted such a faithful portrait of someone incredibly naive and unexperienced about affairs of the heart that she feels all too real.

Highsmith is also excellent at maintaining momentum. With its clipped prose and choppy sentences, it feels like a suspense novel, because everything moves so quickly, including the conversations between characters. I found it difficult to put down, if only because I wanted to know how the relationship between Therese and Carol panned out.

On that note, I should point out that if you are considering reading this book, it’s best not to read other reviews online, including the wikipedia entry, because they all make a big point of revealing the ending. And if you buy this Bloomsbury edition, leave the introduction by McDermid until last, because it too features a major spoiler. The blurb, I’m happy to report, gives nothing away.

7 thoughts on “‘Carol’ by Patricia Highsmith”