Today’s guest is Stu from Winstonsdad’s Blog, one of the more unconventional literature blogs out there. I say unconventional, because Stu largely covers translated fiction and his posts tend to ignore the usual rules of grammar. But his blog is a fascinating wealth of unusual and under-rated fiction from across the globe, a great resource to dig around in if you’re looking for reviews of books you have probably never even heard of.

Stu is married, is in his late thirties and works supporting people with learning disablities. Winston is his dog.

A favourite book: A Universal History of Infamy by Jorge Luis Borges

I bought this about 20 years ago in Barter Books in Alnwick. It was one of the first few South American books I read. Borges collects a number of stories here centering on real life people, mainly rogues and criminals like Billy the Kid and Ching Shuih. The stories are witty and dreamlike, and range from a a couple of pages to 20 pages; Borges ever only wrote shorter fiction.

This was a wonderful introduction to the greatest South American writer. His influence can be seen in Marquez, Bolano and even the flash fiction that has become the flavour recently. So, if you think Borges is scary, this would be the place to start. He wrote it early in his writing life — you can see what made his later works great in these early tales. He lived in Beunos Aries and worked in the library. He also became blind in later life and would have people read to him like Alberto Manguel. I love the twist on real life these tales give and the love of South American fiction it gave me. 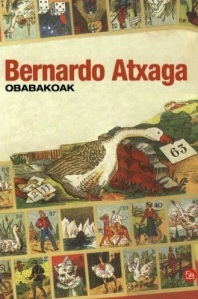 A book that changed my world: Obabkoak by Bernardo Atxaga

Now I read this last year and it in its own small way set forth what Winstonsdad’s Blog is all about — books in translation. The book is set in a small Basque village and is a set of interlinking tales about the people that live in this smalll village in the Basque area of Spain. The loves, lives and losses, a small drawf that dreams he is a great poet, a half-German half-Basque that admires German culture over his village culture.

This books contains many things I love. It is so different to any books written in English style-wise, but the stories it tells are universal. Any village is always a collection of charcaters and always a few strange people. Novels about villages are always ones I look out for and interlocking tales are something I love, so this made me want to shout from the roof “read this book” and thus start my blog and then, looking back, made me want to blog about translations. This is one of the few books written in Basque and one of the even few translated in to English.

A book that deserves a wider: Encylopedia of Snow by Sarah Emily Miano

Now people may say the “translation boy” has picked a book by a American writer, but I’ll tell you why. I would have picked Sebald as my favourite but I know dovegreyreader did that last month, so I decided to honour my hero with a pupil of his here.

The premise of the book is that it was found in an abandoned car after a snow storm. So what is this book? Well it’s like a collection of a snow watcher and contains facts, poems, tales, historic tales and photographs. The style of the book owes much to Sebald but Miano is a lot more poetic than Sebald in her wrting. This book needs to be read to absorb it fully, there are so many parts it is like a snowflake itself. I always pick it up when it is snowy and flick through it and read either a poem or a historic tale of a great snow fall.

Thanks, Stu, for taking part in my Triple Choice Tuesday!

As I expected, Stu has chosen some unusual titles, all of which could be argued deserve a wider audience. These recommendations do make me itch to read more translated fiction…

What do you think of Stu’s choices? Have you read any of these books?