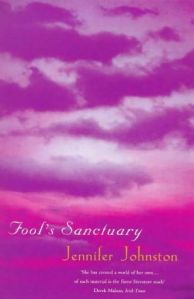 For the past four years I’ve been slowly making my way through Jennifer Johnston‘s extensive back catalogue of novels. Fool’s Sanctuary, first published in 1987, is her eighth book — and my eleventh.

There’s something quite comforting about entering JJ’s fictional world, and it has nothing to do with the subject matter, which can often be dark and disturbing, but more to do with the way in which she handles words and stories, and, above all, treats her readers with intelligence.

Her prose style is not at all descriptive or explanatory, so that you often have to figure things out as you go along, and most of the action moves ahead via dialogue, some of which is extraordinarily confusing as several conversations play out between characters all at the same time. But there’s something about her style, which also interweaves first and third person narratives, that gives her novels a distinctive, familiar and occasionally ambiguous flavour. I dare say it’s a flavour you either love or hate, but for me, her novels are a special kind of heaven.

Fool’s Sanctuary is no exception, although it seems far darker than any of her more recent forays into fiction. This one is set during the Irish Civil War, circa the late 1920s, and most of the action takes place in a big house in an area on the coast north of Donegal known as Termon (which is essentially Irish for “sanctuary”, hence the novel’s title).

The story opens with an aged Miranda Martin lying on her death bed, looking back on an evening from her youth that was to shape the rest of her life. In a narrative that swings from the past to the present and back again we discover how Miranda and her tree-loving widowed father got caught up in events that were much bigger than their quiet, peaceful lives.

By page 7 we already know that Miranda’s young lover, Cathal, was taken away that night and shot in the head, but we don’t know why this happened or what events lead up to his death. It’s only when Miranda’s older brother Andrew returns home on leave from the British Army that you get the first inkling that all is not well within the family. Andrew, a survivor of the Great War, is dismissive of the Irish desire for Home Rule and belittles his father’s goals of reafforestation and land reclamation as nothing more than “romantic rubbish”.

‘I think that like most Irish people I’ve ever met you just talk on and on about things you don’t understand very well. […] I didn’t mean to be r-rude. But you seem as a race to have this capacity for turning feeling into fantasy, and then you all get so worked up about oh… ah… d-dreams. Always dreams. M-maybe I’m quite wrong. Maybe when I’ve been here a little longer I’ll begin to understand what all the f-fuss is about.’

The tension between the two factions — the pair of British soldiers on leave for a few days, and the Anglo-Irish father and daughter, who still reside in Ireland — merely mirrors the nation’s predicament. But even without the politics, this is a heart-hammering drama that pits nice, well-meaning people against each other only to result in tragedy. That Johnston achieves this in just over 150 pages, without getting bogged down in extraneous detail (nor preaching), is nothing short of stunning.

As ever, what JJ delivers is a carefully crafted novella of immense power. And if you’ve not read anything by this Irish author before, this is a good a place as any to start.