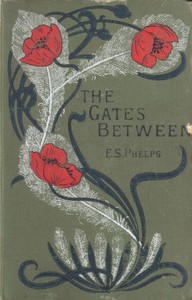 Do you ever wonder what on earth possessed you to buy or borrow a particular book? I have absolutely no memory of even downloading this one — a freebie from manybooks.net — before I left London in mid-November.

So when I started reading it earlier in the week in the hope it might cure my fictional reading slump, I hadn’t a clue what it was about (one of the most annoying things about eBooks is the lack of blurbs), but I liked the sound of the title and the author’s double-barrelled surname.

According to Wikipedia, Elizabeth Stuart Phelps (1844-1911) was an American author best known for her three Spiritualist novels, The Gates Ajar, Between the Gates and Beyond the Gates.

Alas, I could not find any information about Between the Gates apart from a small description on Encyclopedia.com which described it as “the afterlife adventures of an agnostic doctor”. I rather suspect that if I’d known that at the outset I would not have read this book. But however unappealing a story with Christian overtones might sound to me, I admit that once I’d begun reading the opening chapters I was hooked.

The story is told from the point-of-view of a 45-year-old doctor, Esmerald Thorne, who is the bastion of the small-town medical community in which he resides. His patients love him and he loves his patients. But if you read between the lines you also get to see that he might have a bit of a “god complex”, because he is a man of science who thinks himself slightly superior to the mere mortals he treats.

Of course, with hindsight, and knowing that the book has a strong religious message to impart, it’s clear that Stuart Phelps wants to cut her doctor character down a peg or two.

She gives him a more human side by having him fall desperately in love with Helen, a woman 12 years his junior. (“My accident held me a prisoner for six weeks. But my love put me in chains in six minutes.”) And after a short courtship the pair marry and later become parents to a son. Dr Thorne describes himself as being “chloroformed with joy”.

Then the cracks in their marriage begin to appear. Dr Thorne is an irritable man and he begins to find Helen irritating. He cannot understand why she frets so much about their poorly son. He dismisses the baby’s constant crying as nothing more than teething problems.

And then one day, after a tiff with his wife, he storms out and is involved in a fatal horse and carriage accident.

I had been dead twelve hours before I found out.

The rest of the book revolves around Dr Thorne coming to terms with his new life in the “afterlife”. He begins to realise that he might have been a good human doing good things in the human world, but his lack of faith has left him slightly diminished in the world of the dead. He doesn’t quite fit in and struggles to comprehend that all his success counts for nothing in this new place.

Good luck, good looks, good nerves, a good income, an enviable reputation for professional skill, personal popularity, and private happiness — these things had struck me as so wholesome that they must be admirable. […] Now it was as if, in the act or fact of dying, I had moved a step or two, and looked over the edge of the bright shield.

Further on Dr Thorne meets a young boy in the afterlife and is devastated to discover that it is, in fact, the son he insisted was healthy. Now he begins to learn about humility — and fatherhood, and what it is like to live a woman’s life in which child-rearing and domesticity is the central focus.

I have to admit that the moral and religious lessons do wear thin very quickly — and that they are so bleeding obvious as to be cringe-worthy. However, I suspect the ideas presented here were new and exciting at the time of publication, and maybe even 21st century Christians and theologians will find much more to appreciate in The Gates Between than this somewhat cynical, atheist reviewer!

But the book is easy to read — provided you can forgive Stuart Phelps’ tendency towards breathless gushing and composing entire paragraphs out of questions — and it provided a decidedly different flavour to my usual reading material. Whether it got me out of my reading slump remains to be seen.

2 thoughts on “‘The Gates Between’ by Elizabeth Stuart Phelps”