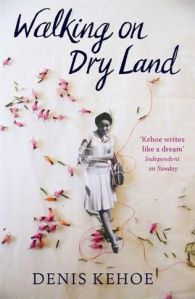 Denis Kehoe is a young Irish writer, based in Dublin. Walking on Dry Land is his second novel. But the story is not your typical Irish fare: this one is set in Portugal and Angola, and has a distinct West African feel about it.

Admittedly, this is not what I expected when I requested the title from the publisher and for the first 50 or so pages I had trouble orientating myself. But once I got my head around the location — and the storyline — I found myself thoroughly enjoying it, particularly as it has the pace of a thriller without sacrificing the meatiness of the content. And there’s something about the prose style, and the shortness of the chapters, that lulled me into a dream-like state, so that whenever I put the book down I felt as if I was still caught up in its pages.

The story is an age old one, about a woman’s search for the mother she never knew, but it’s told in a refreshing way.

Ana is in her early 30s and was raised by her Portuguese parents in Lisbon. She’s now a professor of film studies and is doing her PhD at Trinity College Dublin, where she resides. (That, you see, is the Irish connection.)

Ana’s mother has recently died (of breast cancer), prompting her to investigate the secret she’s always kept hidden to herself: that her birth mother was not a white Portuguese woman, but a black woman from Angola, with whom her father had an affair. This knowledge has been something she has kept to herself her entire life.

Her first memory of not truly belonging to her family happened when she was four, as she was walking down a Lisbon street with her elder brother, Tiago, and two gossiping neighbours stared at her.

But it took Ana a few more moments to figure out that the two sets of dry, hungry eyes were trained directly on her, that they had been following her. And to understand the words they were swapping were careless scissors set to snip her apart, two dogs barking at her heels. Yes, all of a sudden she was coldly certain these two women were busy trading versions of where she came from. Of who she really belonged to, for as sure as they were guardians of order and respectability in Carcavelos, this child, almost white but not quite, was not the offspring of José and Helena de Castro. There was a story here, a scandal here, and they were so busy inventing their own versions of it, they didn’t expect the voice shouting at them from the other side of the street. “Senhoras, Close your mouths! Close your mouths or the flies will get in! The flies will get in!”

Armed with a photograph and a vague idea that her biological mother might have been a cabaret singer, Ana heads to Luanda, the capital of Angola, to begin her search. Her brother, Tiaga, also happens to live in Luanda, so her trip is disguised as a visit to catch up with him and his young family.

Ana’s story is undercut, in alternate chapters, with the story of her parent’s — Helena and José. Beginning in Lisbon in October 1965, it traces their romance, marriage and new life in Luanda, where they settle and have children in the early 1970s. These chapters, short and sweet, provide the narrative tension that makes you want to keep reading on, because how could these two idealistic, young adults move from romantic love to one in which José screws around with the native women?

What I liked most about this book, aside from the great characters (Ana’s mother, Solange, is particularly well drawn), was the little insights into Angola’s troubled history, particularly its relationship with Portugal, which ruled it as an overseas territory until 1975. These snippets, including Helena and José having to flee the war that erupted during independence, gives the narrative a distinct flavour.

And I liked the constant references to films — one chapter’s opening is even written like a movie poster — which are dotted throughout, giving weight to Ana’s character as a film obsessive.

I can’t say this is a happy book, although there’s a resolution here which makes it a rewarding one. Walking on Dry Land is a compassionate, complex tale, ripe with politics, passion and family secrets.

4 thoughts on “‘Walking on Dry Land’ by Denis Kehoe”