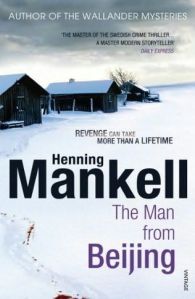 Despite liking Scandinavian crime novels, I’ve never quite got around to reading anything by Henning Mankell, arguably the grand master of the genre. I’ve been reluctant to read his Inspector Wallander mysteries because there are 11 books in the series, a major commitment for someone like me who would want to read them all in the correct order.

But The Man From Beijing is a stand-alone book, so there was no need to worry about over-committing myself. As it turns out, it was an entertaining read, and one that was not terribly demanding, but I’m not sure that it’s encouraged me to go down the Wallander route — although I’m prepared to be convinced otherwise.

The story starts off with a real show-stopper: nineteen people, all related, are slaughtered in a sleepy Swedish village in the dead of winter. It is Sweden’s biggest mass murder. The media are crawling all over it, but the police don’t have a clue as to who might have committed it. Was it a lunatic gone mad with a machete? Or a thoroughly planned exercise by a team of killers? What, exactly, was the motive?

But The Man From Beijing is not a police procedural. The story is told largely through the eyes of Birgitta Roslin, a perfectly nice middle-aged judge from Helsingborg, who is distantly related to a couple of the victims. In her working life Birgitta has seen and done it all (her experiences, related as back story, serve to highlight the dark underbelly of Swedish society). When she is signed off work with high blood pressure, she decides to fill her days investigating the mass murder — as you do.

She has a few run-ins with the detective in charge of the investigation — a bullish woman by the name of Vivi Sundberg — but on the whole it’s clear that Birgitta is miles ahead of the police in terms of finding leads and potential suspects. But how can she connect the red ribbon found at the scene with a nineteenth century diary? And who was the mysterious Chinese man who booked into a local hotel the night before the murder?

Just as Birgitta’s investigation begins to really take off, Mankell does something unexpected. He takes the story back to 1863, at a time when three Chinese brothers were press-ganged into working on the railroad that links the American east coast with the west. What does this have to do with the murder in Sweden more than a century later? Ah, that would be telling, wouldn’t it?

I think the major problem I had with this book was its structure. It morphs into a kind of political thriller, and the event which opens the book in such stunning style gets almost forgotten as Mankell builds up an extensive web of corruption across three continents: Europe, Asia and Africa.

As you might expect from the title, a large chunk of the book is set in China. In fact, Birgitta, who wanted to join the Red Guard in her youth, visits the country on a spur-of-the-moment decision to continue her unofficial enquiries (the fact there is no mention of acquiring a travel visa was just one of many factual omissions that annoyed me while reading this book).

The China depicted here is modern and vibrant, but it is also deeply divided. Just as Mankell makes undisguised commentary about Sweden’s social problems through the criminal cases over which Birgitta must preside, in the Chinese parts of the novel he makes more undisguised commentary about a rampant economic system, Communism and corruption. Indeed, he ties them all together, and then throws in a semi-plausible plot about China wanting to “export” its poverty-stricken peasants to Zimbabwe and Mozambique in exchange for helping to develop those countries. (I rather suspect Mankell read Mark Leonard’s What Does China Think? as part of his research, because he regurgitates a lot of the facts that Leonard presents in his book, including the notion that China donates huge sums of money to African nations that have been turned down for loans by the International Monetary Fund.)

As a thriller, the story has a sufficiently menacing undertone to make one keep turning the pages. But as a crime novel it lacks punch, probably because the killer is clearly identified very early on in the book. Mankell then spends some 300-plus pages explaining how that killer came to do what he did.

On the whole, I enjoyed The Man From Beijing as a “holiday read” (I was travelling around Ireland at the time), but it’s a woolly book in need of some tight editing. It is easily 200 pages too long. Still, the saving grace is Birgitta, a convincing character with just the right touch of paranoia, to keep the story pedalling along.

12 thoughts on “‘The Man from Beijing’ by Henning Mankell”